AUSTIN, Texas—UT Austin Villa, a team of programmers led by University of Texas at Austin computer scientists Peter Stone and Patrick MacAlpine, has won the 2011 RoboCup Soccer championships in the 3-D simulation division. 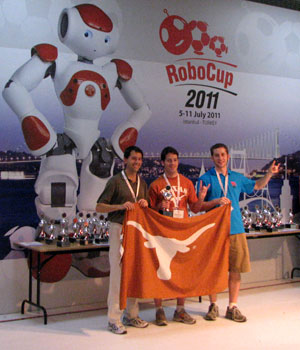 The annual tournament, which was founded in 1997 to foster innovation in artificial intelligence and robotics research, was held last week in Istanbul, Turkey.

The UT Austin Villa team beat 21 other teams from 11 nations for the trophy. In the process they scored 136 goals and conceded none.

The key to victory, says Stone, was that he and his graduate and undergraduate students taught their robots to teach themselves.

“Most of the other teams used hand-coding,” says Stone, associate professor of computer science. “They chose where to put the joints, how to tweak the walk. They tuned it by hand. We used the distributed computing cluster here in the department, which has hundreds of computers, in order to do machine learning. Every night we would have the robots practice. They would try walking one way and score themselves based on how quickly and how stably they could get to the ball and direct it toward the goal, and then the next night they’d do it again, trying different approaches and refining the ones that worked. About three weeks before the competition we came up with this walk that was suddenly able to beat anything we could see from the other teams.”

The walk gave the UT Austin Villa players such an enormous advantage, says Stone, that he and his co-programmers were able to devote a considerable amount of each game to testing a pass-based strategy they knew would be less effective than the dribble-based strategy with which their robots scored most of their goals.

“We were thinking about next year,” says Stone. “If other teams catch up to us on the walk, which I think they will, then it’ll be much more about passing and positioning.”

That kind of rapid advancement, says Stone, is the point of the Simulation League, which is the only one of the five leagues in the tournament that doesn’t involve real nut-and-bolt robots. Instead, the games are played by two teams of nine autonomous artificial intelligence (AI) programs. The programs battle it out in a videogame-like environment.

Each “player” has to react, in real time, to the data being sent to it by its teammates and by the simulator, which models the physics of the real world and is constantly recalculating its datastream based on where the 18 different players are going, when they’re bumping into each other, when they’re falling down and where they kick the ball.

“It’s one level abstracted away from the real world,” says Stone, who also fields one of the top teams in the Standard Platform league. “The simulated robots don’t have a vision sensor. Instead they’re told their distance and angle from the ball and the goal, which is something you get from real robots only after some processing. They still have to figure out where they are on the field, however, and where their teammates are by combining data from each other. You still see them falling over when they get knocked into each other. They still have to learn how to walk, which is the biggest technical challenge in the real and simulation leagues.”

Because it’s not nearly as expensive to test simulated robots, and because much of the experimentation can be done in the wee hours, without humans around to pick up the robots that fall down, there’s more time and less cost to trying out new strategies. And because RoboCupSoccer is fundamentally an academic enterprise, dedicated to advancing science, the novel strategies that succeed are published in academic journals, inspiring other teams to incorporate the advances.

“We actually introduced this idea of learning-based walks in the Standard Platform league back in 2004,” says Stone, “and everybody started using it. But then the tournament switched from robot dogs to robot humanoids, which are less stable, so people went back to hand coded methods. Now that we’ve won the competition, I’d be really surprised if at next year’s competition there aren’t several teams that are walking like this, in the simulation league at least, and possibly in the other leagues as well.”

The larger goal, says Stone, is one that’s being accomplished every year, no matter who wins and loses. It’s to improve the science and technology of autonomous robots so they can improve the world. With this broader goal in mind, RoboCup has expanded since its founding to include a variety of other tournaments. Teams in the RoboCupRescue tournament compete to master tasks that might aid in search and rescue in large-scale disaster situations. RoboCup@Home is oriented toward applications that can assist people in everyday life. And RoboCupJunior is for the kids (up to age 19).

RoboCup has already changed the world, says Stone, who is on the board of trustees of the organization and has been competing since the beginning. Robots first developed for the competition were recently deployed in Fukushima, Japan, after the nuclear reactor disaster. One of the early winners of the RoboCupSoccer tournament, a professor from Cornell University, is the mastermind behind the robots that are now managing inventory and filling orders at the warehouses of companies like Amazon, Staples, Walgreens, Zappos and the Gap.

It’s likely to be a while, says Stone, until intelligent robots are ubiquitous in our lives, folding our laundry and unloading our dishwashers. But other aspects of a Jetsons-like future aren’t so far off, he predicts.

“If I had to guess about where robots are most likely to have a big real world impact, in the near future,” he said, “I’d say it’s on the roads. Autonomous cars. There’s a clear task. Roads are well defined. The technology is getting close. There would be huge economic benefits, and huge social benefits in terms of allowing mobility to people who don’t have it now.”