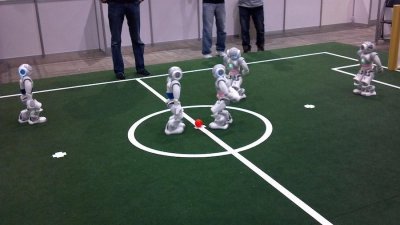 The annual tournament, viewed as the world’s biggest robotics and artificial intelligence event, was founded in 1997 and draws scientists and students from around the world. RoboCup teams consist of humanoid Nao robots, which are programmed by students to think and play the game, UT officials said.

For the first time in the university’s history, the Texas team won the RoboCupSoccer Standard Platform League competition — the highest profile league at RoboCup.

The championships are a validation of the computer science department’s research, said UT Professor Peter Stone, who led the UT team to victory.

“The team includes research contributions from several of the students in my lab over a period of many years,” Stone said. “Since RoboCup is a very high-profile event in the international research community, it will also have a very positive impact on recruiting top undergraduate and graduate students in the coming years.”

While the team doesn’t have direct commercial applications, over the years RoboCup has generated spinoff technologies.

UT’s robots are made by French firm Aldebaran. The school provides testing and software development for the company.