In a speech Wednesday to an audience of computer science students, Bill Gates, Microsoft founder and co-chair of the Bill & Melinda Gates Foundation, offered his vision of how the computing revolution will dramatically improve human well-being in the next few decades.

Gates was on campus for the opening of the new Bill & Melinda Gates Computer Science Complex, a 140,000-square-foot, $120 million complex for the university’s top-10 ranked Department of Computer Science. The complex was funded in substantial part by the Bill & Melinda Gates Foundation. The Michael & Susan Dell Foundation also contributed significantly to the complex. 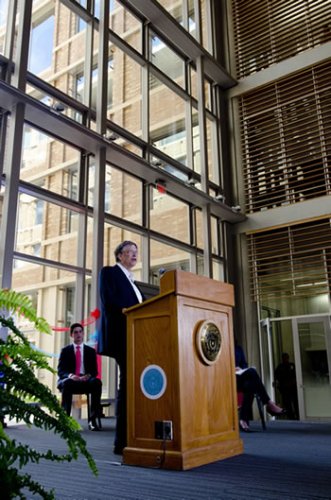 Following a ribbon-cutting ceremony, in which Gates was joined by an artificially intelligent robot, he spoke to a group of computer science students and faculty.

“If I had a choice to be a student at the time I was, when the idea of personal computing and the internet were being created, or today, I’m not sure which era I would choose,” said Gates. “Certainly in terms of the impact on the world, it is the era that we’re in right now, building on all that previous work, that is going to be the most exciting.”

Gates focused in particular on how computing will affect two of the primary projects of the Bill & Melinda Gates Foundation: fighting infectious disease in the developing world and improving and democratizing education.

“The question is how do we take these extraordinary advances so that they’re not just benefitting those who are doing well, in places like the United States, but the entire globe. How do we take advances in domains like health, sanitation, agriculture and finance and make them affordable and usable for everyone, so that we are lifting up the living conditions of those who are often invisible to us, who in some ways should be our highest priority,” he said.

Gates gave as an example the work that University of Texas at Austin computer science professor Chandrajit Bajaj has done creating three-dimensional models of where the HIV molecule might be vulnerable to vaccines.

He also discussed a project the Gates Foundation launched to develop a better epidemiological model for malaria, which is the number one killer of children in the developing world.

“The model used up until recently didn’t capture the richness of the disease,” said Gates. “It wasn’t good enough to answer the key question, which is: Can we go in with drugs and bednets and insecticides and actually help whole countries where lots of children die of malaria? Will that work or not? In a sense this is a software problem, and one that we’re now much more able to solve.”

On the topic of education, Gates said that we’re just at the beginning of understanding how technology will change instruction. 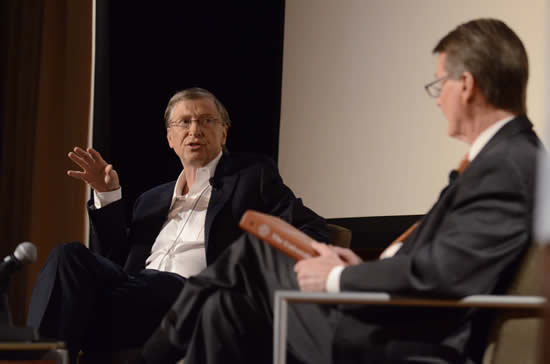 “Of course you use tools like Microsoft Word to write papers, and you look up facts on Wikipedia,” he said, “but in terms of the actual delivery of instruction and the personalization of that instruction, the promise is all in front of us.”

He pointed to the success of the online tutorial site Khan Academy as an example of the kinds of solutions that will emerge.

Gates said that he expects that it is the students of today who will create the new tools that will enable the most transformational changes.

“I envy you being in computer science today,” he said.

In response to this challenge, and in recognition of the Gates Foundation’s contribution to the new computer science complex, the College of Natural Sciences honored Gates by dedicating to him a new “research stream” in its pioneering Freshman Research Initiative (FRI).