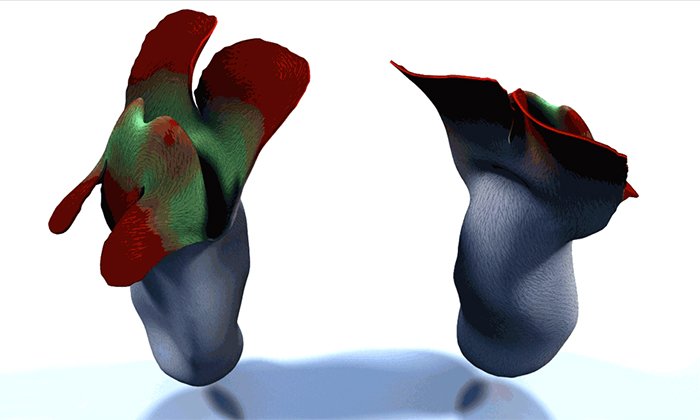 Nature has a way of making complex shapes from a set of simple growth rules. The curve of a petal, the swoop of a branch, even the contours of our face are shaped by these processes. What if we could unlock those rules and reverse engineer nature's ability to grow an infinitely diverse array of shapes?

Scientists from Harvard University and the University of Texas at Austin have done just that. In a paper published in the Proceedings of the National Academy of Sciences, the researchers demonstrate a technique to grow any target shape from any starting shape. This work might have applications in soft robotics, artificial lenses or in tissue engineering.

Watch a video of a snapdragon forming from a cylinder

"Architect Louis Sullivan once said that 'form ever follows function'," said L. Mahadevan, the Lola England de Valpine Professor of Applied Mathematics, of Organismic and Evolutionary Biology and of Physics at Harvard University and senior author of the study. "But if one took the opposite perspective, that perhaps function should follow form, how can we inverse design form?"

In previous research, the Mahadevan group used experiments and theory to explain how naturally morphing structures — such as Venus flytraps, pine cones and flowers — changed their shape in the hopes of one day being able to control and mimic these natural processes. And indeed, experimentalists have begun to harness the power of simple, bioinspired growth patterns. For example, in 2016, in a collaboration with the group of Jennifer Lewis, the Hansjorg Wyss Professor of Biologically Inspired Engineering at Harvard's School of Engineering and Applied Sciences (SEAS) and Core Faculty Member of the Wyss Institute for Biologically Inspired Engineering, the team printed a range of structures that changed its shape over time in response to environmental stimuli.

"The challenge was how to do the inverse problem," said Wim van Rees, a postdoctoral fellow at SEAS and first author of the paper."There's a lot of research on the experimental side but there's not enough on the theoretical side to explain what's actually happening. The question is, if I want to end with a specific shape, how do I design my initial structure?"

Inspired by the growth of leaves, the researchers developed a theory for how to pattern the growth orientations and magnitudes of a bilayer, two different layers of elastic materials glued together that respond differently to the same stimuli. By programming one layer to swell more and/or in a different direction than the other, the overall shape and curvature of the bilayer can be fully controlled. In principle, the bilayer can be made of any material, in any shape, and respond to any stimuli from heat to light, swelling, or even biological growth.

The team unraveled the mathematical connection between the behavior of the bilayer and that of a single layer.

"We found a very elegant relationship in a material that consists of these two layers," said van Rees. "You can take the growth of a bilayer and write its energy directly in terms of a curved monolayer."

That means that if you know the curvatures of any shape you can reverse engineer the energy and growth patterns needed to grow that shape using a bilayer.

"This kind of reverse engineering problem is notoriously difficult to solve, even using days of computation on a supercomputer," said Etienne Vouga, former postdoctoral fellow in the group, now an assistant professor of Computer Science at UT Austin. "By elucidating how the physics and geometry of bilayers are intimately coupled, we were able to construct an algorithm that solves for the needed growth pattern in seconds, even on a laptop, no matter how complicated the target shape."

The researchers demonstrated the system by modeling the growth of a snapdragon flower petal from a cylinder, a topographical map of the Colorado river basin from a flat sheet and, most strikingly, the face of Max Planck, one of the founders of quantum physics, from a disk.

"Overall, our research combines our knowledge of the geometry and physics of slender shells with new mathematical algorithms and computations to create design rules for engineering shape," said Mahadevan. "It paves the way for manufacturing advances in 4-D printing of shape-shifting optical and mechanical elements, soft robotics as well as tissue engineering."

The researchers are already collaborating with experimentalists to try out some of these ideas.

This piece was based on a press release by Leah Burrows at Harvard University.