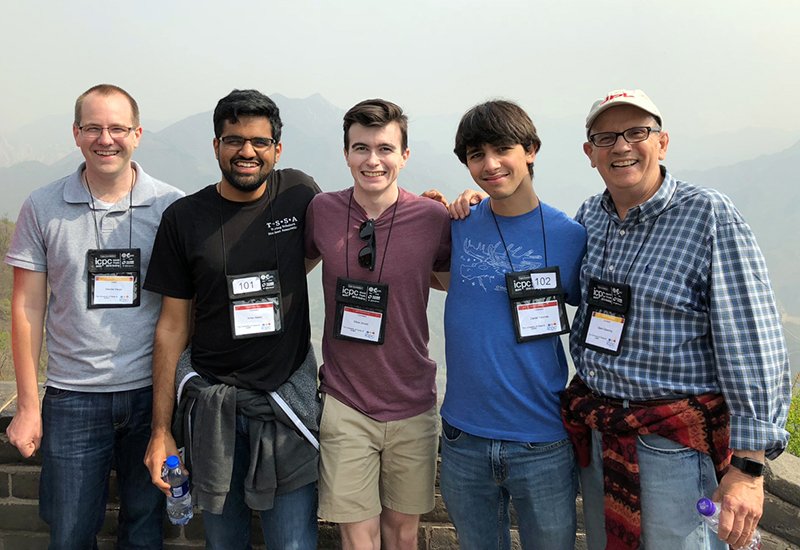 On Thu, 19 Apr 2018, the UT Competitive Programming team competed at the ACM-ICPC World Finals at Peking University in Beijing, China.

The competition consisted of teams from 140 regions (approx. 420 students) trying to solve 11 problems in 5 hrs and 20 min. The first-place team, Moscow State University, solved 9 problems. UT solved 4 problems and tied with 42 other teams for 56th place.

Teams consist of three students. The students on the UT team were Arnav Sastry ('18), Ethan Arnold ('19), and Daniel Talamas ('18); the faculty coaches were Etienne Vouga and Glenn Downing.

UT qualified for the world finals by winning the South Central USA region, which includes Texas, Oklahoma, and Louisiana and includes over 60+ teams from 25+ schools. UT has been competing in the Regionals since 1997, and places in the top 5 almost every year. In 2014, one of our four teams took 2nd place at the regionals. In 2015, one of our four teams took 2nd place again, but all four of our teams were in the top seven. In 2016, our four teams swept the regionals with 1st, 2nd, 3rd, and 4th place. Qualification for the world finals this year followed a concerted effort to improve UT's performance at the contests, including the creation of a new elective, CS104c: Competitive Programming, taught by the faculty coaches and club officers.

The ACM International Collegiate Programming Contest (ICPC) is the premier global programming competition conducted by and for the world's universities. The ICPC is affiliated with the ICPC Foundation, enjoys the auspices of ACM, and is headquartered at Baylor University. For over four decades, the ICPC has grown to be a game-changing global competitive educational program that has raised aspirations and performance of generations of the world's problem solvers in the computing sciences and engineering.

In ICPC competitions, teams of three students represent their university in multiple levels of regional competition. Volunteer coaches prepare their teams with intense training and instruction in algorithms, programming, and teamwork strategy. Several ICPC universities and ICPC volunteers provide online judging systems to all free of charge. Top teams from regional competition advance to the final round. This year's regional competitions advanced teams to the World Championship round - the 2018 ACM-ICPC World Finals hosted by Peking University - which was conducted on 19 April, 2018 in Beijing, China.

In the past 20 years alone, ICPC participation has increased by more than 2000%. Last year, ICPC Regional participation included 49,935 of the finest students and faculty in computing disciplines from 3,098 universities in 111 countries on six continents. A record 53,446 students and 5,411 coaches competed in ICPC and ICPC-assisted competitions last year, setting new records in participation.