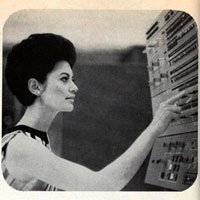 Today it's almost assumed that computer science is a field set aside for nerdy men. Writing at the blog of the programming firm Fog Creek Software, Anna Lewis, the firm's recruiting director, says it isn't so. In fact, in 1987, 42% of American programmers were women -- and, for a period, programming was even considered "women's work." 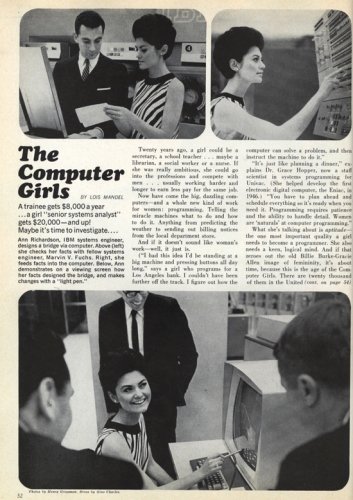 Lewis highlights an article from the April, 1967 issue of Cosmopolitan, "The Computer Girls":

[I]f it doesn't sound like woman's work -- well, it just is.... "I had this idea I'd be standing at a big machine and pressing buttons all day long," says a girl who programs for a Los Angeles bank. "I couldn't have been further off the track. I figure out how the computer can solve a problem, and then instruct the machine to do it."

"It's just like planning a dinner," explains Dr. Grace Hopper, now a staff scientist in system programming for Univac. (She helped develop the first electronic digital computer, the Eniac, in 1946.) "You have to plan ahead and schedule everything so it's ready when you need it. Programming requires patience and the ability to handle detail. Women are 'naturals' at computer programming."

Where did all the women go? The rise of the personal computer, Lewis argues, created the impression that computer programming was a solitary endeavor for creepy (male) loners. By the 1980s, only about one in five computer science majors were women. That trend is beginning to reverse itself -- today, it's around one in four -- but the erroneous idea that computer programming is and always has been "for boys" helps to keep those numbers down. It's a classic case of the way history can end up erroneously justifying a silly status quo. Read more at Fog Creek.