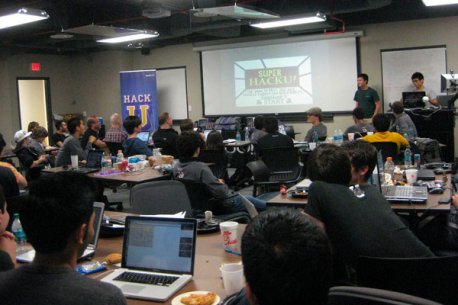 PhoneSlice, a version of the popular mobile game Fruit Ninja, won Yahoo's UT-Austin Hack U contest. Farhad Abasov, Michael Teng, and Michael Akilian created a proxy server to communicate between two iPhones and the Flash application. One iPhone was used to throw the fruit and the other to slice it. Because of the implementation difficulties involved in communicating between an iPhone and Flash and all of the custom technology that they had to build within the 24-hour period, they won the HackU event and took home new iPads.

Over 40 students created 20 projects ranging from applications that lock you out of FaceBook until you get your homework done to an alarm clock that will not shut off until you solve a math problem to a game using smart phones, geo-positioning, and invisible boundaries to play tag.

"We had a great time this year at the University of Texas. We've met a lot of very talented and determined students who are going to make great additions to the engineering force once they graduate. A big thanks to our hosts at the campus and for everyone that made this event a success," said Jonathan LeBlanc, Yahoo! Principal Software Engineer / Technology Evangelist.