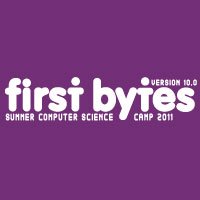 The tenth annual First Bytes Summer Camp, sponsored by UTCS, kicked off on June 17th, 2012 on the university campus. The free weeklong camp showcases the potential of a career in technology to selected Texas high school girls.

Campers attended presentations on subjects such as high level/low level programming, computer ethics, cryptography, logic games, and gender roles. At Corporate Chat, professional women working in the field of computer science talked with girls over lunch about what it’s like to have a fascinating, well-paying job, and provided career mentoring. VMWare hosted a coding challenge, and outside the UTCS AI Lab, the girls explored Marvin, the autonomous driving vehicle.

The campers also had ample opportunity for hands-on learning. They participated in a smartphone app programming challenge, using IPRO, a virtual robotics program designed to teach computational literacy. Campers went on a field trip to St. David’s Texas Institute for Robotic Surgery to see how the robotic da Vinci Surgical System works and had a hands-on experience of maneuvering the robotic arms in an operating room. Rackspace guided the girls through a team building and communication game based on server communication theory, which involved logical thinking and problem solving. This year’s lab project used Arduino hardware, an open-source electronics prototyping platform, to control a strand of programmable color changing LED lights. Campers first complete a C++ tutorial and programmed in a language similar to C++ to blink the lights and control their color and brightness. By the end of the week, they progressed to creating complicated moving light patterns.

Campers enjoyed campus life and had a taste of what it’s like to be a UTCS student. Department advisors talked to the girls about earning a degree in computer science, getting into UT, dual majors, scholarships, and career opportunities for UTCS graduates. They had a pool party, shopped on the drag, and played basketball, wallyball, and racquetball at UT RecSports.