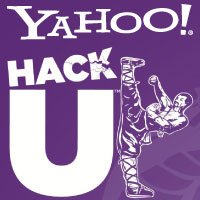 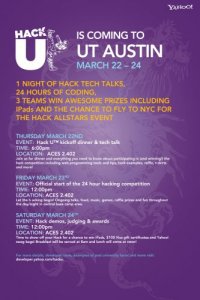 Yahoo! Hack U is two days of learning, hacking and fun. Yahoo! Hack U came to UTCS March 22 & 23rd. Attendees at this year's hack heard interesting tech talks, received hacking tips and lessons, and took part in hands-on coding workshops where they worked with cutting-edge technology.

Hackers hacked for your opportunity to win cool prizes, a spot in the gallery, street cred and the chance to represent their school at the Hack All-Stars Event in New York City.

Winner Li Zhang, a petroleum engineering major commented, “The 23 hours of coding really showed me how much progress we could make as a team in such a short amount of time. The competition illustrates our work flow after we graduate and start working: everyone is working on their own piece in parallel, so it's our job to make our code readable and able to be easily implemented.”

The second place hack, a videogame called Tramp Runner, demonstrated a good use of integration with physics principles. Team Tramp Runner, represented by Julian Michael and Evan Ott, developed the video game. Tramp Runner is a game in which the player’s avatar is a human being with separately controlled movements of head and feet jumping on a fixed trampoline track shown as a series of masses connected by springs in the middle that actually follows the laws of physics.

Two teams tied for third place. Teeter Party, by Craig Yeh was an impressive development of a multi-user simulation leveraging physics principles to achieve optimum balance on a virtual TeeterTotter. Also tied for third place was TwitterStorm, a hack developed by Prad Nelluru offering a real-time 3D Twitter data stream visualization as a storm of Tweets.

Additional hackers representing the iSchool included the team of Sophia Kang and Daniela He, the only female hackers, who developed an image comparison game.

Photos of the event can be seen at: http://flic.kr/s/aHsjzhRgok

How i become a part of it ,.. can anyone tell me ,..?
<p>Hi, Waqas. This Hack-a-thon was held last year. For future Hack-a-thons, UTCS students are invited to attend via posters, web and email announcements, and the attend the event to participate.</p>