A New Curriculum for a New Marketplace 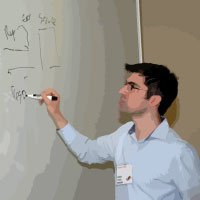 In June, 2011 the New York Times published an article that prompted a conversation on whether the field of computer science (CS) was experiencing a Sputnik moment. The debate was a response to a nationwide surge in computer science enrollment—a trend that has shown no signs of abating in the 18 months since. 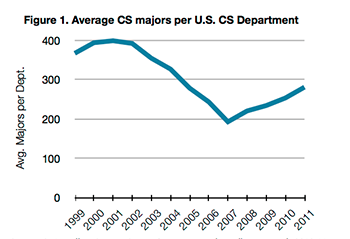 In 2006, The University of Texas at Austin housed 818 computer science majors. Six years later that number has more than doubled, exceeding 1,700 students and bringing the department very nearly back to dot.com era enrollment.

This rising tide of CS majors is indicative of more than a response to increased demand from employers, though the Bureau of Labor Statistics certainly suggests that a computer science degree is an excellent way to outflank the sluggish job market. The surge can as likely be credited to the fact that evolving technologies are making a social impact in direct, unprecedented ways. While this may be most apparent in consumer technologies such as social media and smartphones, huge and highly visible changes are also occurring in streaming media, autonomous and computer-assisted vehicles, instantaneous natural language translation, battlefield robotics (think drones), and any number of other areas that excite the imaginations of huge numbers of college-bound students searching for their place in tomorrow’s work force. Simply put, today's students are being drawn to a breed of computer science that comes equipped with a supercharged cool factor and career possibilities for its practitioners that are seemingly limitless.

The challenge for the universities responsible for preparing students for these careers is that the days of a one-size-fits-all computer science education are over. With rich and complex fields like big data, information security, and game design all requiring intensive study in their own right, it isn’t realistic to ask students to complete a uniform battery of required courses and expect that they will be well equipped for the diverse array of career options that await them.

How then to structure a curriculum to tackle a field that is not only diverse but rapidly evolving? This question was fortunately anticipated more than a decade ago by the Association of Computing Machinery, which put forth a series of curricular reforms aimed at getting universities to build degree plans that were inherently more responsive to a field marked by rapid evolution.

For the first time this fall, UT Austin has put many of those recommendations into place. The old curriculum demanded that students take a long list of courses from all topic areas deemed to be of major significance, leaving them little room for electives or specialization. The new curriculum flips that concept on its head, establishing only a minimal core deemed critical to anyone obtaining a computer science degree. Students now take two courses each in programming, systems, and theory, leaving them free to complete the majority of their studies in coursework specific to their interests and career plans. The expected result is that the department will graduate alumni better prepared to respond to today’s job market.

In tandem with this overhaul, the department has also launched a series of targeted, optional concentrations that will provide interested students with a high degree of specialization in key fields.

The first of these, the INFOSEC program, certifies students who want to intensively study cybersecurity and privacy. Reflecting the improved alignment with market demand, students graduating from INFOSEC who choose to work in government labs and agencies focusing on cybersecurity regularly receive a $10,000 starting salary bump.

A similar industry-friendly focus can be found in the game development program, where computer science has partnered with faculty and practitioners in fine arts and radio-television-film to offer students an interdisciplinary curriculum centered on training high-demand creative technologists. The program incorporates a capstone course that establishes deliverables built around team-structured, real-world modeled game design and development.

As students take advantage of the opportunities offered by the new curriculum, enrollment in coursework in other in-demand areas like big data and cloud computing is expected to grow, and additional areas of concentration areas are sure to follow.

Only time will tell if this rush of students into computer science marks the Sputnik moment some are claiming, but there is one fact we already know. The original Sputnik moment was born out of the threat of being challenged and a fear of falling behind. Our moment is one marked by a more organic excitement—an excitement born out of the enormous potential for technological advancement and growth that has become available to a generation of students uniquely well positioned to understand how technology and their personal contributions can make a direct impact on the world in which we live.

Our goal at The University of Texas at Austin is to make sure we have given them every opportunity to capitalize on that potential.