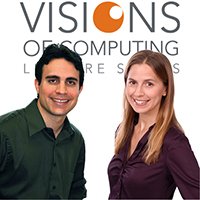 On Tuesday, November 5, 2013, UT Computer Science held the annual Visions of Computing Lecture, a lecture series honoring UTCS faculty accomplishments. Through this lecture series, faculty presented insights into computer science research and education to the public and the computing community. 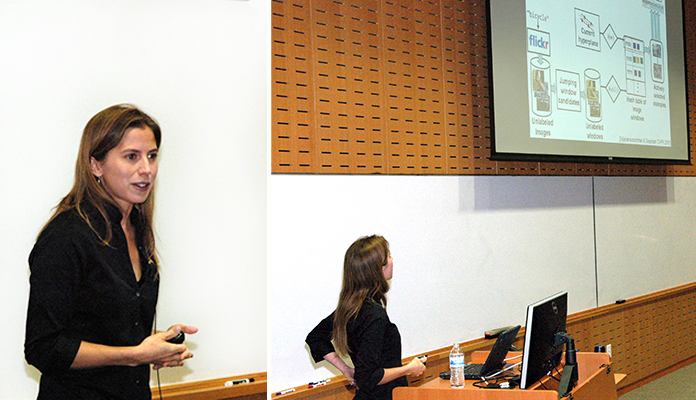 Abstract: Widespread sensors and unprecedented connectivity have left us awash with visual data---from online photo collections, home videos, news footage, medical images, or surveillance feeds.  Currently human attention is needed to interpret most of it, and computer users are accustomed to primitive search mechanisms based on keywords.  However, to make visual data truly accessible, computer systems must be able to automatically recognize objects and activities in images and video.  How can we teach visual concepts to a computer?  Our work indicates that it requires not only advanced statistical models, but also interactive learning methods that bring human “teachers” into the loop, and semantic representations that can couple data-driven patterns with rich high-level knowledge.  I will highlight some recent results, and discuss visual recognition's ties to big data, crowdsourcing, and broader artificial intelligence.

Speaker Biography: Kristen Grauman is an Associate Professor in the Department of Computer Science at the University of Texas at Austin.  Her research in computer vision and machine learning focuses on visual search and object recognition.  Before joining UT-Austin in 2007, she received her Ph.D. in the EECS department at MIT, in the Computer Science and Artificial Intelligence Laboratory.  She is an Alfred P. Sloan Research Fellow and Microsoft Research New Faculty Fellow, a recipient of NSF CAREER and ONR Young Investigator awards, the Regents' Outstanding Teaching Award from the University of Texas System in 2012, the PAMI Young Researcher Award in 2013, and the 2013 Computers and Thought Award from the International Joint Conference on Artificial Intelligence.  She and her collaborators were recognized with the CVPR Best Student Paper Award in 2008 for their work on hashing algorithms for large-scale image retrieval, and the Marr Best Paper Prize at ICCV in 2011 for their work on modeling relative visual attributes.

Abstract: Cryptography is the art of protecting information that is not physically secure. Cryptography is used everyday in computing applications ranging  from secure web sessions to authenticated software updates.

While these traditional applications view cryptographic data as being inert, there has recently been a surge in the research community for computing on cryptographic data. Recently, our capabilities have changed dramatically in this area. We now have cryptographic systems for fully homomorphic  encryption, functional encryption, and code obfuscation ---  all of which seemed very implausible as little as five years ago.

In this talk I will introduce these topics and some of my recent research in the area.

Speaker Biography: Dr. Brent Waters received his Ph.D. in Computer Science from Princeton University in 2004. From 2004-2005, he was a post-doctoral at Stanford University then worked at SRI as a Computer Scientist. In 2008 he joined the faculty at The University of Texas at Austin. Dr. Waters' research interests are in the areas of cryptography computer security.

Dr. Waters both publishes and has served on the program committees of the top technical security venues (CRYPTO, Eurocrypt, ACM CCS, Usenix Security and the IEEE Conference on Security and Privacy). Dr. Waters has been an invited speaker in industry and at research Universities, including MIT, CMU, and Stanford. He was the keynote speaker on functional encryption at the 2008 NIST workshop on Identity-Based Encryption and invited speaker at PKC 2013. Dr. Waters is a National Academy of Sciences Kavli Fellow, recipient of the NSF CAREER award, a Microsoft Faculty Fellow, a Sloan Research Fellowship, Packard Science and Engineering Fellowship, and Presidential Early Career Award for Scientists and Engineers (PECASE) recipient.