It’s no secret that women in tech are far more rare than they should be. At UT Computer Science, however, First Bytes is working to change this by reaching out to girls at a time when their career paths are still somewhat undecided. Established eleven years ago, First Bytes is a one-week camp for high school girls designed to ignite enthusiasm for computer science and dispel myths about the field that keep women from participating. 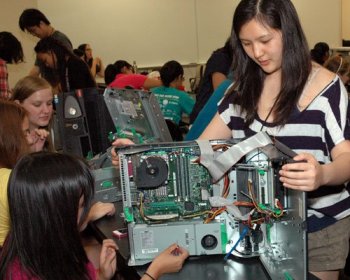 Over the course of the week, campers are given a lab project that allows them to apply the computer science concepts they are learning. In the past, some of these have included Lego Mindstorms, digital animation and creating games. Program coordinator Mary Esther Middleton says that today’s campers tend to come in with a little bit more tech knowledge than in the past, so they have been able to assign more challenging projects. This year, campers will learn to use C++ and create a light show by controlling LED lights.

First Bytes is funded partially by donations from companies that make an effort to connect with the girls at the camp. For instance, Amanda Nunez, connected with Amazon through First Bytes and later ended up working for them. The camp is also free to Texas residents, giving some girls an opportunity that they may not have had otherwise.

Amanda and her sister Ashley Nunez are among the many former campers who have later gone back to help run the camp. UT students can apply in the springtime (and the application is currently open) to be either residential assistants or program assistants. Not all students involved are computer science majors, but most are majoring in a related field such as math, science, or engineering.

The camp encouraged many former campers, like Ashley, to become UTCS students. Nunez explains, “First Bytes not only introduced me to many paths and projects available to those who are in computer science, but it also gave me the opportunity to meet many of my peers who I would work with coming into computer science and some truly fantastic mentors.”

When the program first started, only a couple of campers typically joined UTCS as students each year, but enrollment numbers have been gradually increasing. Middleton explains, “We’re getting the message across that you can do a lot with a computer science degree, and so they seem a little more focused now, or maybe we’re better at selecting the ones [campers] that we think will be interested, too.”

UTCS enrolled its first 3 campers in 2006. Between 2007-2010 UTCS was accepting between three and seven campers each year. In 2013, this number grew to 13.And, the number of campers joining UTCS just keeps growing, with next fall reaching a new record of 15 campers slated to become UTCS students.

Middleton, who is a UTCS alumna herself, says that the biggest thing she wants girls to take away from the program is that with computer science “you can touch on so many different roles in so many different careers… if they want to go into a business type application development, if they want to go into a medical field, a research field, all these things require some computer knowledge and they can have fun doing it and make a big difference.” She emphasized, however, that at the end of the day, the camp is about teaching girls to focus on something that they’re passionate about— be it computer science or otherwise.