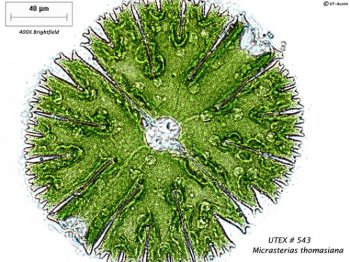 Using a host of methodologies, including a new statistical method developed at The University of Texas at Austin, an international collaboration of researchers have completed a large-scale DNA study that reveals important details about key transitions in the evolution of plant life on our planet.

From strange and exotic algae to trees and flowers growing deep in steamy rainforests to the common plants living in people’s lawns, all plant life on Earth shares over a billion years of history that included the evolution of multicellularity, roots and water-conducting vessels, seeds and flowers.

Comparing plant DNA from over one hundred plant species from across the green tree of life, the scientists produced some exciting findings, including that evolution does not always lead to more complex organisms.

“Whereas the origin of land plants was facilitated by evolutionary innovations including new cell types and parental care of an embryo, the most closely related group of algae actually evolved simpler body plans [reduced complexity] relative to the ancestors they shared with land plants more than 500 million year ago,” said Jim Leebens-Mack of the University of Georgia, a corresponding author of the paper, published recently in the Proceedings of the National Academy of Sciences.

In order to reveal their findings, the research team generated millions of gene sequences derived from dozens of plant species, yielding a daunting amount of data.

“The datasets we were analyzing in this study were too big and too challenging for existing statistical methods to handle, and so my student Siavash Mirarab and I developed a new method to produce the species trees described in the paper,” said Tandy Warnow, who was a professor in the UT Department of Computer Science during the study and is now at the University of Illinois.

Warnow’s student Mirarab is a graduate student in the College of Natural Sciences and co-lead author of the paper. The method they devised is called ASTRAL and was published earlier this year in the journal Bioinformatics.

Mirarab explained why ASTRAL is so special, “Across the genome there are different genes and every single one of them can have a history that's to some extent different from the next gene, so each gene can have its own tree. ASTRAL looks at all the gene trees for different parts of a genome separately and summarizes them into one tree that describes the evolutionary history of the species as a whole. And when it does that summarization, it takes into account some of the biological processes that are considered important for estimating evolutionary trees.”

Even with this new method, analyzing the data required massive computing power. The bulk of Warnow and Mirarab’s work was conducted through UT Austin’s Texas Advanced Computing Center (TACC) and a powerful computing cluster available to computer science students, while other authors made use of the iPlant Collaborative at the University of Arizona, the Compute-Calcul Canada, and China National GeneBank (CNGB).

“This study demonstrates how life scientists are using high performance computing resources to analyze astronomically large datasets to answer fundamental questions that were previously thought to be intractable”, said iPlant’s Naim Matasci. The resources and repositories for the sequence data used in the study are described in a companion paper published in GigaScience.

The results of the study’s analyses are helping to settle many longstanding controversies about relationships among major plant groups and illuminate the complex processes that allowed ancient water-faring algae to evolve the structures necessary for vegetation to take root and colonize the land. As plants grew and thrived across the plains, valleys and mountains of Earth’s landscape, rapid changes in their structures gave rise to a myriad of new species. The group’s data also helps scientists better understand the ancestry of more recent plant lineages, including flowering plants and non-flowering cone-bearing plants such as pine trees.

Co-lead author Norm Wickett of the Chicago Botanic Garden described the study as “like taking a time machine back to get a glimpse of how ancient algae transitioned into the diverse array of plants we depend on for our food, building materials and critical ecological services.”

Ultimately the researchers hope that their project will not only shed new light on the origins and development of plant life, but also provide researchers with a new framework for the study of evolution.