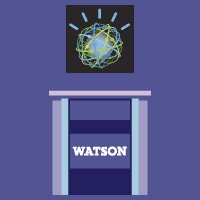 UT Computer Science is partnering with IBM to launch a new cognitive computing course that gives students unprecedented access to one of IBM’s most prized innovations: Watson. UT-Austin is one of seven universities offering the new course this fall.

Watson is a cognitive technology that interacts in natural language, processes vast and disparate forms of big data and learns from each interaction. Watson can sift through and understand massive amounts of big data at unprecedented speeds to assist professionals in understanding data quickly and easily, while increasing knowledge and value over time. Watson famously beat champion players on the TV show Jeopardy! in 2011.

The upper-division course, co-designed by Bruce Porter, professor and chair of the Department of Computer Science, along with other leading academic experts and IBM’s Watson Group, will empower students with the technical knowledge and hands-on learning required to develop new cognitive computing applications fueled by Watson’s intelligence.

Students will form business teams and have access to their own Watson instance via the Watson Developer Cloud. As a class, they will select an industry to focus on, such as retail, travel or healthcare, and then will work as a team to import relevant data into Watson and train it. Ultimately, the students will break into teams and develop prototype apps and a business plan based on their Watson industry of choice.

For example, in the retail domain questions can focus on: "How can Watson be applied to personalize the consumer shopping experience?” In the travel industry: "What changes would be applied to help consumers target their next vacation based on their experiences and interests?” As result, each student will gain the perspective and vision of a technology entrepreneur who can transform industries and professions with cloud-delivered expert advisors that think, learn and discover valuable insights from massive amounts of data.

This class contributes to an important strategic goal of the Department of Computer Science, according to Professor Porter, "Watson demonstrates the power of machine learning and data analytics. These are increasingly important technologies that are transforming entire industries and creating new ones. They are important to every top computer science program."

Over two decades of research, Porter and his team have developed core technologies for automated question answering that have been incorporated into Watson. Four members of the team currently work on the Watson project at IBM.

According to research firm Gartner, Inc., smart machines will be the most disruptive change ever brought about by information technology, and can make people more effective, empowering them to do "the impossible." Building on the 4.4 million IT jobs Gartner predicts will be created to support Big Data by 2015, the following universities will educate a new generation of innovators who can bring to life this new dynamic of people and machines working together to solve pressing industry and societal challenges.