The field of computer science is playing a balancing act in our society these days. In some circles, holding a computer science degree immediately brands you as a cool techie who is going to catch the next plane to the promised land that is Silicon Valley. On the other hand, there are still many people who buy into the image of a computer scientist being an antisocial hacker who does genius things with computers. The second stereotype persists because the portrayal of computer science in media has largely remained unchanged for years. The result is that while the enrollment of students in computer science programs is increasing, there is still a part of the population that does not understand what a computer science education entails and the kinds of job opportunities it offers. The lack of awareness is a troubling issue because the world is advancing toward a future where we will become increasingly dependent on technology in all aspects of life and an understanding of computers is a must.

Along with the issue of skewed perception, socio-economic barriers and a lack of exposure are other reasons that many people never explore computer science. The Department of Computer Science at the University of Texas is a part of the effort to provide outreach and work to resolve ameliorate these issues through both student-led and department-led initiatives. Programs and organizations such as UTCS Roadshow and Code Orange offer the public a wealth of information they otherwise might not have access to. 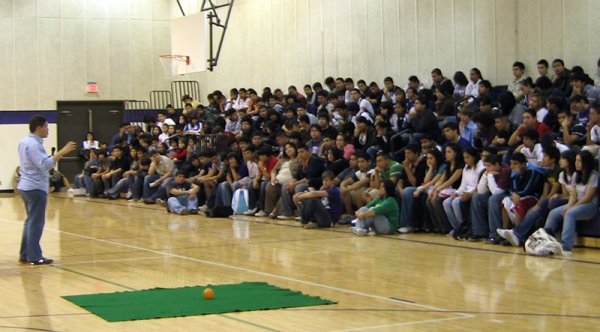 Over the years, Roadshow has grown from a departmental initiative into a full fledged student organization. Due to popular demand, growing membership, and routine success, recently, Roadshow has been expanding the number of services it offers. First and foremost, the organization is trying to meet the communities thirst for diversifying the presentations they give.

Every year, the University of Texas puts on an event called Explore UT, also known as “the Biggest Open House in Texas”, where UT opens its doors to the public and departments across campus put on various events. Roadshow participated by giving series of successful presentations at various locations in GDC. By far, their most popular talk was one about Game Development. The presentation had been newly added to the Roadshow repertoire. Alvin Deng, one of the presenters, recalls that even though “…it was really nerve-racking” he “had a lot of fun with it and the presentation went really well!” To attest to the success of the presentation, the GDC auditorium was completely packed and unfortunately not everyone could find a seat. Deng mentions that “during the Q&A session, the audience was really active.”  Spurred by energy and positive feedback from the families that attended, Roadshow is currently working on producing more topic-specific presentations this semester. They are hoping to produce material on in-depth CS topics such as Artificial Intelligence, cross disciplinary topics such as Computational Biology or Computational Chemistry, and more broad topics such as “How can Computer Science help third-world countries?”

Along with presentations, Roadshow members are developing a set of activities in order to better engage young audiences. Currently their most popular activity is a game called Binary Bandit that teaches children about the binary number system using light bulbs (1 is a lit light bulb and 0 is an unlit light bulb). This activity has been put in play at various locations in the past such as Bridgepoint Elementary School and Wonder Lab. Anjie Liang, a leader in Roadshow, retells a time when she was conducting Binary Bandit at an event: “One little boy was so energetic about learning binary that I ended up teaching him hex too! He spent the next ten minutes practicing hex with me. It was really heartwarming to see someone so young be so excited about computer science. It’s definitely moments like those that remind me how impactful Roadshow can be.” The organization has also visited Meridian School of Science to teach students about conditionals through an activity and show them a PacMan AI demo at the end. As Roadshow gears up for another successful semester of spreading CS knowledge, there is no doubt that they will do a great job of connecting with the Austin community.

While UTCS Roadshow is addressing the general issue of a lack of exposure in communities, some UTCS students have recently founded their own outreach organization - Code Orange- to tackle another facet of this problem. Worldwide, there are many communities that do not have access to computer science and tech simply because the families and schools cannot afford to provide that resource for their children. As a result, children from those communities grow up missing out on a set of skills that is fundamental to being successful – whether that be navigating Microsoft Word or creating the next greatest tech product.

Code Orange was founded by three UTCS students: Moiz Rizvi, Danyal Rizvi, and Sohum Chitalia. The idea for the project came in a conversation with a friend who was born and raised in East Austin. He described that children in his community had the perception that they did not belong in the world of tech.  Of course these perceptions are misguided, but without any one to show them that, they would never overcome these feelings. Recognizing this a great opportunity and wanting to work with children specifically, Chitalia, Rizvi, and Rizvi began planning out what would become Code Orange. They were inspired by constructionist education theory, a learning model that emphasizes using projects and activities to instigate knowledge acquisition. “The program isn’t necessarily about computer science per se” Moiz says, but “The curriculum is centered around the concept of ‘creative computing’. It’s a more hands on creative form of educational enrichment that involves fundamental concepts of computing, but focuses on creation, personalization, sharing, and reflection.”

Currently, the project’s pilot program, a 6-week creative computing course, started this month at the Pan American Recreation Center in East Austin. Code Orange is beginning by teaching Scratch (a programming language that allows one to create interactive stories, games, and animations) to children of age 10-12 weekly on Fridays. The team has been excited to get their project running, especially after the appreciation they have witnessed coming from the people at the recreation center and other “non-technical” city employees when they tell them about Code Orange.  In the future, Code Orange plans on fine tuning and revising their process as well as growing course content and spreading to more recreation centers in East Austin.

The Department of Computer Science at the University of Texas is a top-ten ranked institution and is one of the best resources for increasing awareness about computer science education in the Austin area. The two programs discussed are not the only way UTCS students and faculty are engaging the community around them. Programs such as the First Bytes Camp, CS Ambassadors, and other are also tackling the same problem. As the year passes, we can only wait in anticipation to see all the great outreach efforts our wonderful students, faculty, and administration, will be participating in!