HackTX brings students together for a 24-hour hackathon 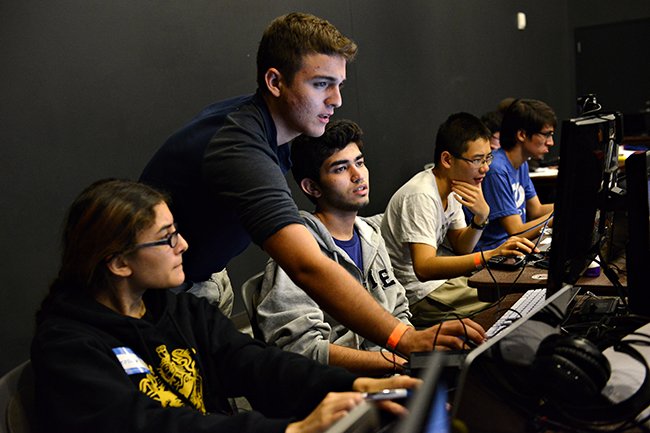 More than 600 students from 10 universities competed to create viable working software in a 24 hour hackathon over the weekend.

HackTX began Saturday at 1 p.m. and concluded Sunday at 11 a.m., after which the teams were judged on innovation, usefulness and creativity. The top 10 teams then presented their work to a panel of technology CEOs and fellow students.

Parkhar Garg, co-lead director for HackTX, said HackTX supplements the classroom experience and provides students with a hands-on chance to show what they are capable of.

“The classroom is a lot of theory and computer science and engineering, but this is a place where they can learn something new and use new skills in a practical manner.” Garg said. “So it’s really about learning, exploring new frameworks and new languages and finding out what you can really do with computer science.”

Electrical engineering sophomore Justin Rubio worked with a team of five and said after overcoming initially difficulties, the team was able to finish their drawing software program on time.

“[In the program] you could follow the movement across the board and simulate painting and draw various things,” Rubio said.

“When we talk to companies we are primarily looking at what technology they had to offer,” Laxmidas said. “When you are working directly with their stuff, they take a certain interest in you because you are using their technology in your own applications. That’s an opportunity to get your resume on the table, and these are companies looking to recruit for internships and jobs. You are meeting a lot of people who can help you in your academic career and your future.”

Ramchandani said he was able to brainstorms with different groups to help develop their ideas further, and once hacking started, said he offered expertise when groups encountered roadblocks and bugs.

“This is an incredible opportunity for students to build something in a short amount of time but also to show off their stuff,” Ramchandani said. “One thing they never taught us very well in school was how to sell ourselves, but these kids are getting the opportunity not only to build something but to show it off and promote it.”