Original article from the Daily Texan 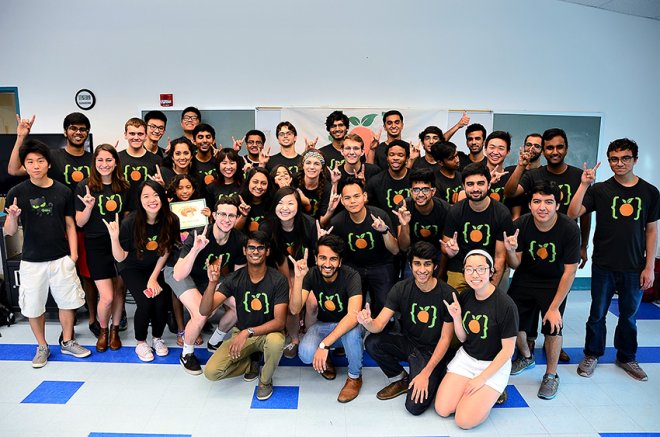 “It was really fun. I love doing all the code,” Calderon said.

Code Orange is a student-led nonprofit. Its goal is to teach young children from underserved communities in Austin not only how to code, but also how to use a variety of technologies. Current leader Moiz Rizvi, a computer science junior, and several of his peers founded Code Orange last September.

The group also provides each child a role model through a mentor/mentee program. They want to give each child a mentor to not only teach them how to code, but also to be someone they can be friends with.

“It’s very focused on creativity, expression, without losing sight of the computing part,” Rizvi said. “We all firmly believe that you can benefit a lot more from not just learning the code … but a lot of things that are far away from things that are just programming.”

Last Friday, the organization held a demo day, in which over 50 students from Zavala and UT Elementary Schools demonstrated projects they had been working on throughout the spring semester.

“I think the projects and the kids’ hard work really speaks for itself,” Rizvi said.

Most of the children created games, while some, such as Calderon, learned Python and HTML.

“I’m really glad my mentor helped me,” Calderon said. “It was an amazing experience. I would love doing it again.”

Parents of the students attended the awards ceremony, during which students received a certificate indicating that they were a part of the mentorship program.

“This is what he wants to do later in life — computer science,” said Lisa Calderon, Joaquin’s mother. “I like that he’s getting instruction. It is a very good program.”

The organization currently consists of UT students, but Rizvi said they have plans to expand to allow community members to join the group as either teachers or mentors — they’re recruiting this coming summer. Rizvi said they do not just want to make an impact in the lives of children; they want to reach out to the public.

“If you came out to demo day, you would’ve seen for yourself how genuinely engaged and talented these kids were in the first place,” he said.