CS professor and Institute for Computational Engineering and Sciences member Robert van de Geijn has been recognized for his research into linear algebra library development with the 2016 Peter O’Donnell Distinguished Researcher Award. 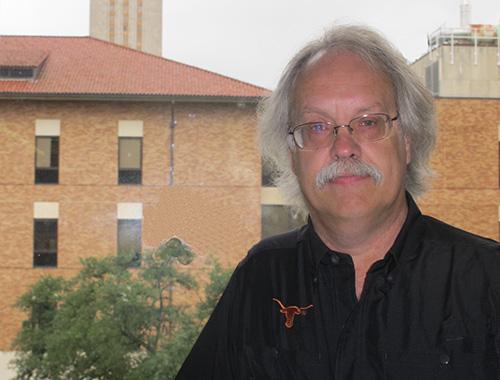 “We look at the patterns in the algorithms that make up software and study the science, the system behind those algorithms,” van de Geijn said. “High performance is the goal because people would be upset if we ran on the big machines at the Texas Advanced Computing Center at a fraction of their peak performance.”

These linear algebra libraries choose algorithms that are best suited for running on a given high-performance computer to make other programs run faster and use less energy. These features make them useful to industry and research alike. The approach also has the benefit of generating programs that are mathematically proven to be correct, said Maggie Myers, van de Geijn’s wife and a lecturer in UTCS.

“Just like you mathematically prove a theorem correct, you prove the program correct,” van de Geijn added. “It’s actually the creation of the proof that gives you the program.”

The computing industry, including Intel, HP, Texas Instruments, Movidius, and AMD, uses libraries developed by van de Geijn and his research group to improve their own products.

Timothy Mattson, a senior principal engineer at Intel, says that efficient computers depend on having linear algebra libraries that run quickly. To make sure Intel’s libraries are up to speed, they compare them with van de Geijn’s.

“Basically, we come out with a new release of our math libraries, Robert would beat them with his own [libraries], and then our math library group would figure out what he did and update our software,” Mattison said. “It’s been a healthy rivalry over the year.”

Improving efficiency is good for business, but it’s also vital for computational research. Devin Matthews, a post-doctoral researcher working with van de Geijn and UT chemistry professor John Stanton, is using the BLIS linear algebra library to develop codes that describe chemical reactions at the quantum level. An important part of this work is computing tensor contractions, an operation that is fundamental to calculations of the kinetic and thermodynamic properties of molecules.

“It turns out you can take certain pieces of it and substitute it out, one piece here, one piece there, and you go straight to tensor contraction,” Matthews said. “So that’s a direct and very visible benefit to chemistry there. What people were doing before took thousands and thousands of lines of code.”

In 2013 van de Geijn and Myers started bringing linear algebra research to larger audience through their MOOC, or massive open online course. The course, “Linear Algebra—Foundations to Frontiers,” has been taught once a year since 2013. The goal of the course is to teach people how the mathematics of linear algebra relates to how algorithms can be programmed.

“We really wanted to teach people how to program for correctness, which is what our research is all about. So I viewed this first MOOC that we created as a step toward that,” van de Geijn said.

Creating the class was a huge undertaking that involved writing a 900-page textbook and filming 270 video lectures. It was an effort that involved the whole family, van de Geijn said.

“We spent Christmas here. It was a family affair and an unreal amount of work,” van de Geijn said.

But the effort paid off. The class has 4.5 out of 5 stars on edX, the online platform where the classes are offered, and the page is full of positive reviews. One in particular sums up the qualities that the Peter O’Donnell Distinguished Research Award seeks to recognize. It reads:

“This course was so amazing, excellent motivation, presentation and exercises (to get insights and intuition). The staff was very active in the discussion forum. This course was like a dream, this was a free high quality education. Really guys I don't know how to thank you, you should so proud for what you offer."