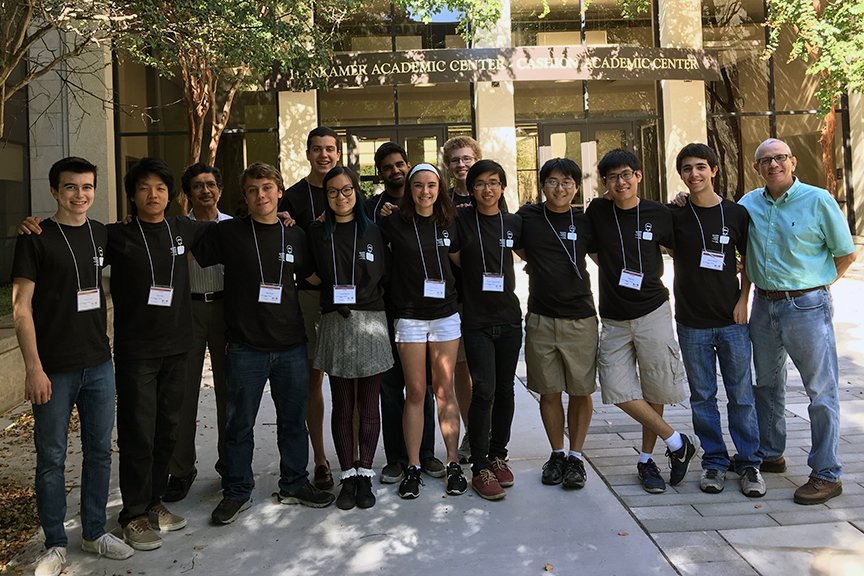 Competitive programming teams from the UT Programming Club swept the first four places in the South Central USA regional competition of this year’s Association for Computing Machinery International Collegiate Programming Contest on Saturday, Oct. 29. They competed against a total of 67 teams from 27 schools and 3 states.

Tens of thousands of students from more than two thousand universities across 91 countries participate in the ACM International Collegiate Programming Contest, a team-based, programming competition operating headquartered at Baylor University. The contest consists of teams of three students working together for five hours to solve a number of problems ranging in difficulty that cover a wide variety of real-life applications.

“Each competition has a mix of problems that test different skills,” UT Computer Science professor and UTPC coach Etienne Vouga said. “Some problems are raw implementation, where you are given a specification for an algorithm and must write a correct implementation of it. Some require specialized algorithms to solve, and the students must first realize which algorithm is necessary. Some are number theory or geometry problems that must be reasoned out on pen and paper.”

This year is the first time that UT has swept the first four positions at the competition and the first time they have won first place at regionals since 2009, although UTPC has consistently landed at least one team in the top 5 almost every year since 2000, according to their website.

“UT Austin has had a strong presence at the ICPC Regionals since at least the late 90s, though our strength waxes and wanes,” Vouga said. “For the last several years, we have come close to going to the finals, but have been edged out by teams from Rice University.”

In September, UTPC coaches Vouga, Glenn Downing and Shyamal Mitra selected the best 12 students from open tryouts to compete in three teams in the regional contest. The teams have prepared by practicing in private contests throughout the fall, coach and CS lecturer Glenn Downing said.

According to the ACM-ICPC website, the contest fosters creativity, teamwork and innovation in building new software program and enables students to test their ability to perform under pressure. Participation in the contests can enhance students’ resumes and help them perform better on technical interviews, Downing said.

“It gives them a deeper understanding and appreciation of the computer science that they learn in their regular classes,” he said.