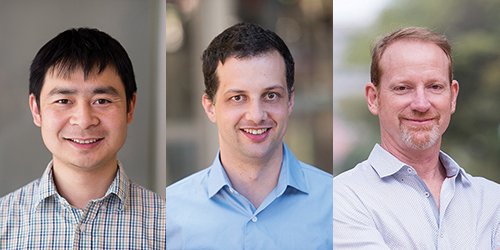 Texas Computer Science assistant professors Qiang Liu, Philipp Krähenbühl, and Christopher Rossbach were selected for the National Science Foundation’s CAREER Award. This is the most prestigious award in support of early-career faculty.

NSF awards this distinction to junior faculty who demonstrate potential to serve as academic role models in research and education. With this award, NSF provides researchers with federal funding, and the opportunity to lead advances in their department and institution.

Liu plans to use this award to develop a new framework for computing probabilities, called Stein Variational Gradient Descent. According to Liu, artificial intelligence systems have improved dramatically in recent years, allowing computers to categorize images better than humans and make intelligent recommendations for everything from movies to health care. At their core, these technologies rely on probabilistic models. But as these systems become more complex, it becomes more difficult to quickly and efficiently calculate the probabilities. Liu’s research aims to address this dilemma by developing a new theoretical and algorithmic framework of efficient and approximate computation of probabilities for highly complex probabilistic models.

Liu expects that his work will provide research opportunities for undergraduates, and also develop educational modules for outreach activities to high school students and undergraduates.

Krähenbühl uses machine learning to enable computers to make sense of the visual world. With help from the CAREER award, Krähenbühl plans to develop efficient, robust, and compact video representations. This can reduce the massive economic and environmental costs of modern digital infrastructure. He also plans to develop computer systems that are better at recognizing what's going on in videos or in the world around them, which could result, for example, in surveillance and assistive technologies for the elderly that are more responsive, or autonomous robots that can move through the world and interact with humans more safely.

According to Rossbach, data centers are projected to consume between 9 and 20 percent of the world's total power by 2025, "so improved performance and efficiency are important to the health of our planet." Field Programmable Gate Arrays, or FPGAs, are reconfigurable devices that could help achieve that goal. But traditional operating systems, designed for fixed-function devices, don't translate well to these new devices which change frequently. Rossbach's research is aimed at developing software for FPGAs that improves utilization and throughput by an order of magnitude or more.

Liu, Krähenbühl, and Rossbach will join the ranks of distinguished researchers from UT and around the world. They received this honor alongside Carlos Baiz, assistant professor in the Department of Chemistry.

This announcement was updated on Aug. 9, 2019 to include Christopher Rossbach.