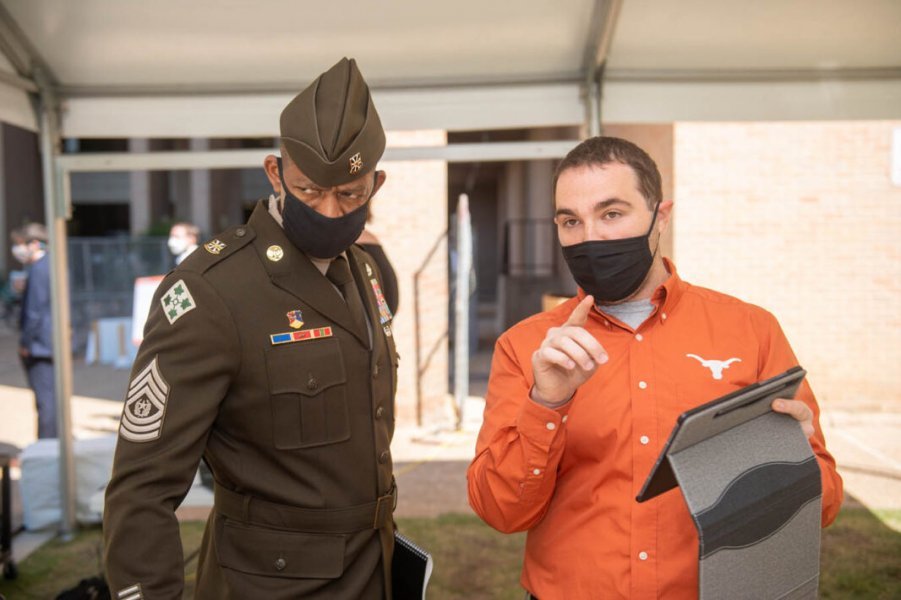 UT Austin is committed to working with the U.S. military to identify and prioritize research that can quickly be adapted to help protect and defend the nation’s interest.

A methodical voice tells the watching crowd, “I am going to remove the lid.” Everyone is quiet as a robot using artificial intelligence (AI) opens a trash can and lifts out a bag. Students and researchers hold their breath as it navigates across the floor of a mock house, avoiding obstacles to its destination. “Mission accomplished,” it says. The trash has been taken out and the audience applauds. This is a huge achievement for the robot designed by a Texas Robotics team for the 2019 RoboCup competition.

It may seem like a lot of fanfare for a basic chore, but it is a complicated task for a machine. The robot demonstrated autonomy and communication skills in a changing environment, key interests for artificial intelligence experts right now and the U.S. military. Related research could help future service robots go beyond taking out the trash to assisting and performing dangerous tasks — keeping soldiers out of harm’s way.

That is why The University of Texas at Austin is proudly partnering with the Army Futures Command, a new four-star command that is transforming Army modernization. Together, they are putting useful research into practice on the battlefield more quickly. The partnership is a commitment to identify and further early research and development that has the ability to transition rapidly, getting new technology quickly to the hands of those who need it.

“The challenges are huge,” says Justin Hart, assistant director of Texas Robotics and an assistant professor of practice with the Department of Computer Science involved in research with the Army Futures Command. Hart is an expert on semantic mapping, autonomous human-robot interaction, and artificial intelligence for service robots. Multi-tasking autonomous AI robots are the holy grail of his field. “We are doing fundamental research that has the ability to be applied to solve problems. We want to ensure there is a pipeline that makes that research available in a usable format.” 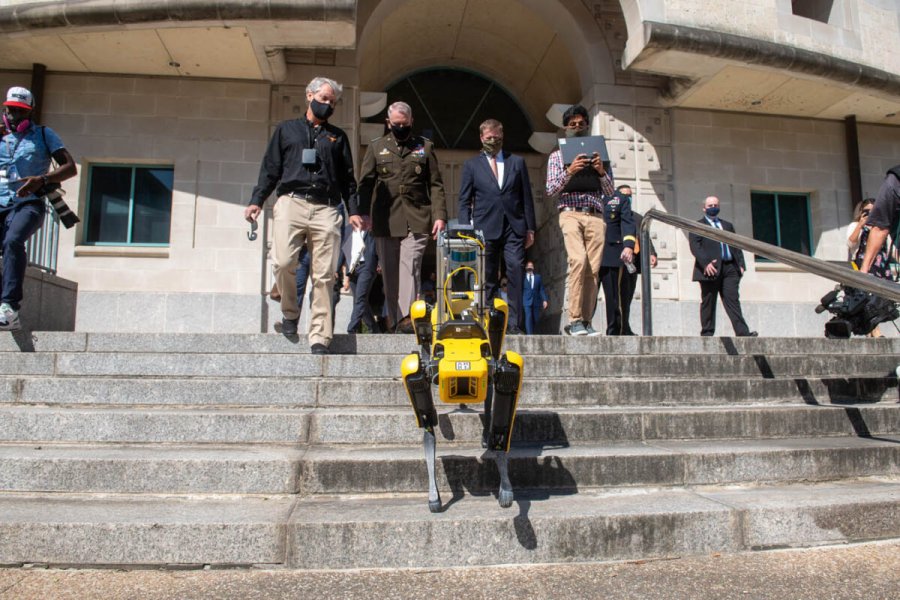 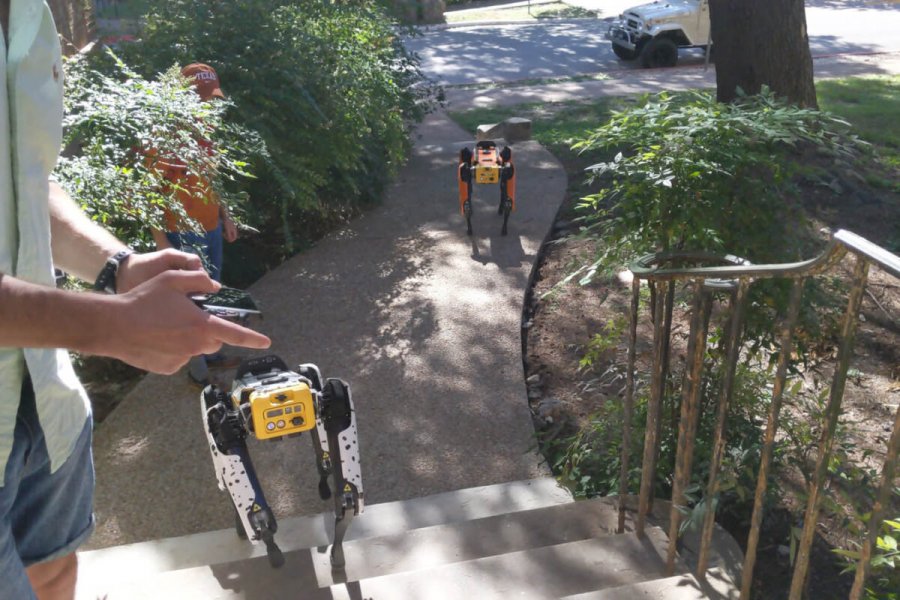 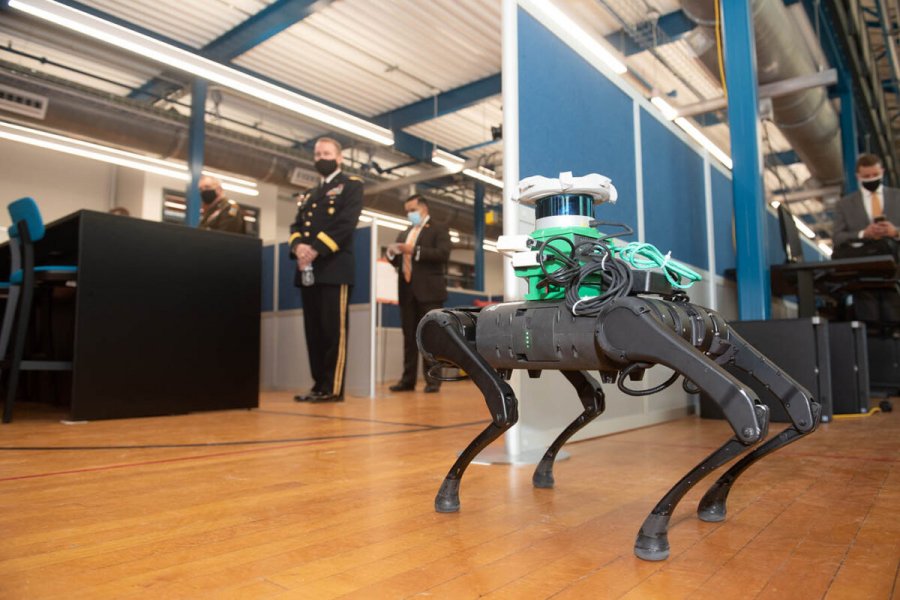 “THE GOAL IS FOR THE ROBOTS TO ALWAYS BE ON AND DEALING WITH WHATEVER COMES THEIR WAY. THAT IS A GRAND CHALLENGE FOR ROBOTICS.”

The computing and engineering challenges have vast game-changing potential for how robots could be deployed in several areas. Texas Robotics, a robust consortium of interdisciplinary researchers led by the College of Natural Sciences and Cockrell School of Engineering, is working to advance the field. Texas Robotics’ collaborative projects explore robotics’ numerous application spaces including social, surgical, rehabilitation, vehicles, drilling, manufacturing, space, nuclear and defense.

Peter Stone, director of Texas Robotics, principal investigator for UT Austin’s robotics research with the Army Futures Command and prominent AI expert on machine learning and dynamic environments, says the university is focusing on two major growth areas. The first is long-term autonomy, the ability for robots to operate self-sufficiently for hours or days rather than seconds or minutes. The second is human-robot interaction that includes autonomous robots that are interacting with people in an unstructured environment. This requires the robot to have the ability to respond to and communicate with humans whether in a health care setting, on the street or during a mission.

“The goal is for the robots to always be on and dealing with whatever comes their way,” says Stone. “That is a grand challenge for robotics.”

Centralizing these efforts makes UT Austin an attractive full-service robotics group for industry and government partners, Stone says. “Over the past five or six years, we have banded together and formed an interdisciplinary group that has an educational component and that has an industry affiliates program. We can explore a lot of synergies across a lot of different perspectives.”

Historically, getting new technologies to the soldiers has been a slow process. The Army Futures Command’s mission is to modernize and speed up that process and “Forge the Future.” In 2018, the Army selected Austin, Texas, as the headquarters for the command after considering cities across the country. The city stood out as an ideal location because of its combination of high-tech and science-related industries, the state government, and the academic reach of UT Austin.

“UT’s location in the technological hub that is Austin, our status of having a top-five-ranked program in AI and our leadership on a brand new artificial intelligence institute funded by the National Science Foundation help show that our friends in the military selected its robotics research partner wisely in picking UT,” says Paul Goldbart, dean of the College of Natural Sciences.

“Innovation has been happening in the government and in leading research universities for decades,” says Sharon L. Wood, dean of the Cockrell School of Engineering. “But now that we’re working together to address specific challenges, we can expand our resources and accelerate the speed at which we roll out new technologies. This is a win-win for both UT Austin and the U.S. Army.”

Today, UT Austin remains fully committed to discovery and advancing the research that could help the world. A keystone project in the Army Futures Command partnership is the newly renovated Anna Hiss Gymnasium, the centralized home for Texas Robotics. 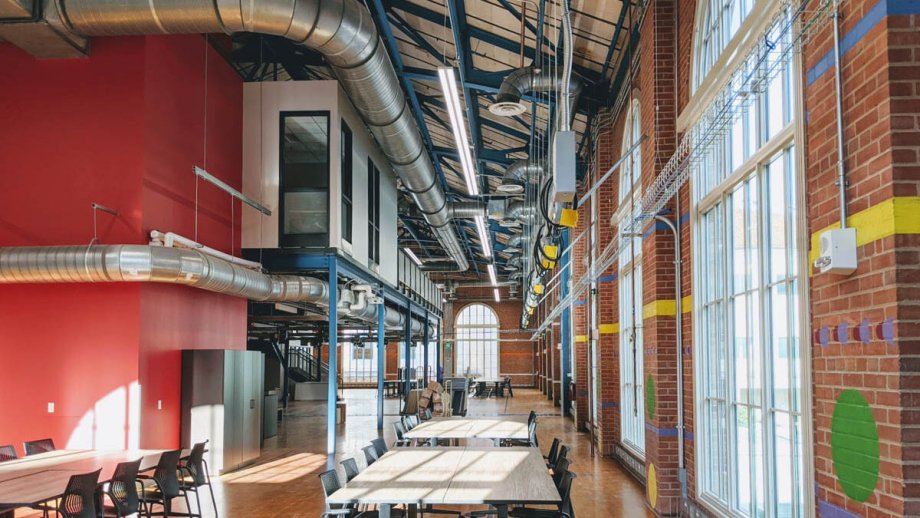 The new space is both a research lab and public showcase for all the robotics on campus. The university committed to building the space last year. The lab benefits the larger robotics program and the military partnership as a hub for cross-disciplinary collaborative research. The ribbon cutting ceremony for the lab was held Oct. 2, 2020, with special guest speakers Gov. Greg Abbott, Army Secretary Ryan McCarthy and UT Austin President Jay Hartzell.

“Texas is ground zero for the next generation of cybersecurity, artificial intelligence, robotics, and all these different strategies that will not only be advancing the United States Army, but will be advancing the next level of technology across the entire globe, with Austin being the centerpiece of it,” said Gov. Abbott. 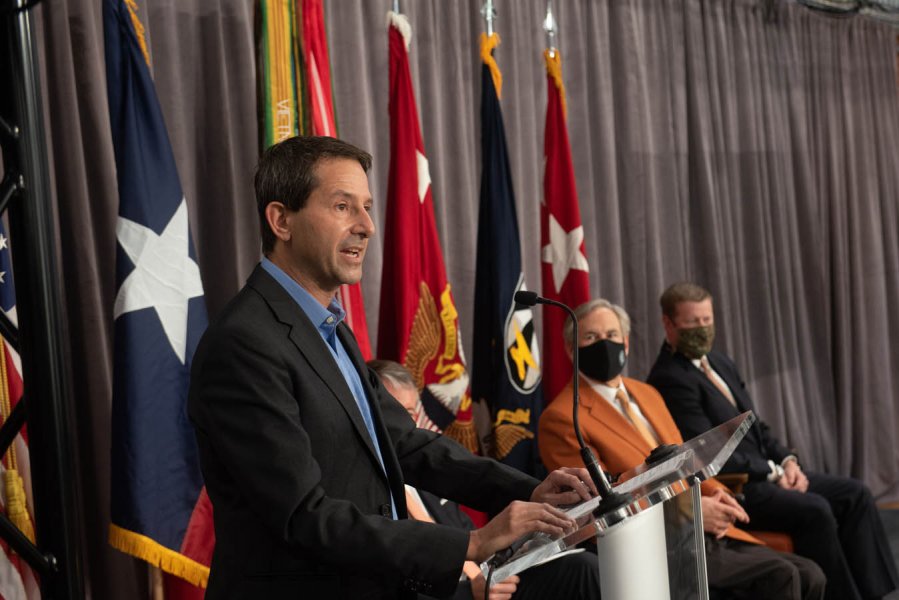 "TEXAS IS GROUND ZERO FOR THE NEXT GENERATION OF CYBERSECURITY, ARTIFICIAL INTELLIGENCE AND ROBOTICS."

“Our commitment to the Army knows no bounds,” said President Hartzell at the ribbon cutting. “We are a world-class partner and destination for the military, veterans and their families.”

“The university’s dedication starts right from the leadership at the top all the way down to the research assistants carrying out the projects,” says Seth Wilk, director of the UT Austin Liaison Office to the Army Futures Command. Partnering with the military helps foster collaboration with government and industry, and it supports impactful academic research.

Stone notes having the military involvement is incredibly useful for research inspiration and creates a path to impact. A few Army employees are working on campus and embedded in the partner projects from the beginning to help make it more efficient and effective. In addition to autonomous robotics, the Army’s priorities include improving navigation, next generation vehicles such as self-driving cars and vertical lift aircraft, material development, and synthetic training environments.

“While other institutions are feeling pressure to pull back in these uncertain times, UT Austin remains committed. We understand that, just as critical technologies have allowed for productivity, connection and engagement amid a pandemic, we must ensure future technologies are there when we need them, too,” says Goldbart. “This requires providing researchers with opportunities to solve today’s intellectual puzzles and bring about profound and positive breakthroughs to help society address and overcome future challenges.”