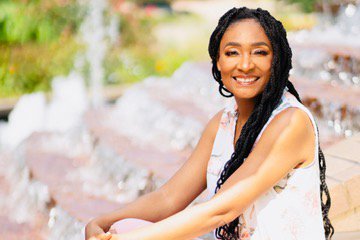 Barbara Jones is no stranger to perseverance: the Texas Computer Science (TXCS) alumna, who graduated from the university in 1998, earned her degree at a time where “there were probably four Black people in the whole computer science department.” With over 20 years of experience in the technology industry, Jones has witnessed massive shifts in how the world grapples with diversity, new technologies, and how businesses operate.

Graduating from The University of Texas at Austin, for Jones, “was a game-changer.” After graduating, she started working at a startup in Austin called 360Commerce. As a Black woman who was the first in her family to graduate from college, entering the technology field in the early aughts meant diving head-first “into a world I didn’t know.”

In her early career, Jones was “always the only woman, most of the time. And all of the time the only Black woman on the tech team.” Her experience made her question why there weren’t more Black women programmers and how to change this lack of diversity. In 2004, when Oracle acquired 360Commerce, Jones saw an opportunity to create the type of diverse work environment that she dreamed of. Rather than join another company and show management the value of a diverse workforce, Jones decided to make her own company, with diversity built into its DNA.

Her company, called Lillii RNB, stands for “Let’s imagine life with ladies in IT” and is an IT consultancy that works with Fortune 500 companies and government agencies. From the beginning, her “goal was to have a team that looks like the world.” This purposeful diversity not only allowed more people into the tech industry, but it played a strategic role. “When you have that many ideas with a diverse group of people, it makes us very valuable to our clients,” said Jones.

“To me, if you want to diversify your teams, you can. And that was my mission, and now we have a very diverse team, so it definitely can be done. And those developers are out there, you have to have the desire to find them,” she said.

Jones found that the biggest struggle while starting her business “was raising capital to get my business off the ground.” After failing to get enough capital, Jones saved $250,000 of her own money to finance her business. From there, she was able to start her business and hire employees, whom she had to train in the relatively obscure technology.

Now, Lillii RNB is off the ground and doing well. They’re doing so well that they are working on a technology solution with the potential to help cities open up as many are under strict guidelines during COVID-19. She participated in the Ascend 2020 Cohort III, and while working with three other small business owners, proposed a method that would allow cities to safely open.

Her cohort designed a method of installing Internet of Things (IoT) devices throughout different buildings being cleaned. As the cleaning is complete, the devices update the dashboard to show where and when each building was sanitized. They proposed the idea to the city of Atlanta, and are now working on deploying the technology.

“I was thinking about accountability,” she said. Jones believed that cities that were equipped with data would make their reopening efforts both more secure and justifiable. It’s one thing to open a city during a pandemic, it’s another to actually track with metrics and dashboards the methods that prove that a city is doing it safely. “We can tell city officials ‘This is how we’re reopening, this is how we’re cleaning, this is how we’re making sure that buildings are getting clean and are safe.’”

Jones is excited to see where her career and company take her. Her story is an example of the power being courageous, following your passion, and having the willingness to be the lone voice in the room championing for change. In her words: “It starts with us.”