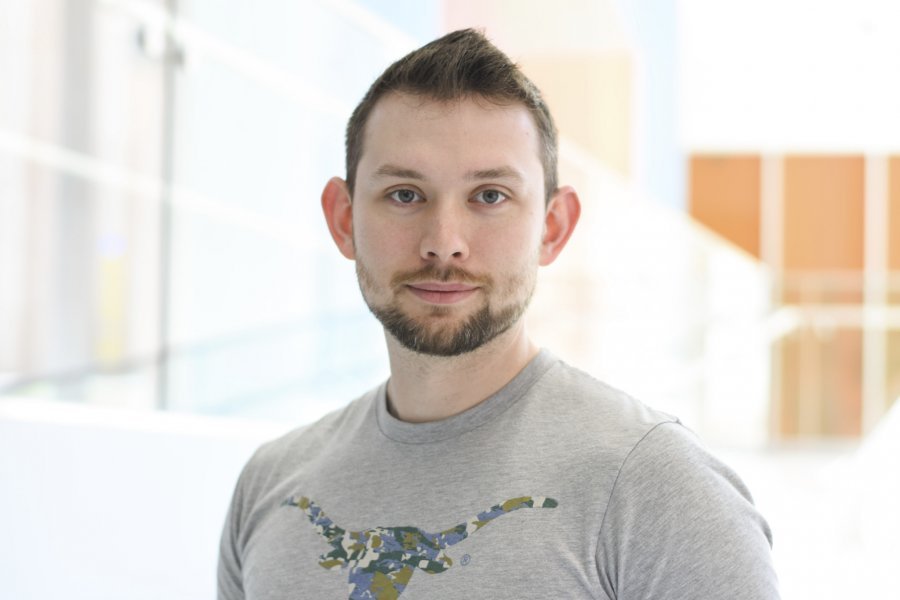 Travis Eakin is 27-years-old, a veteran, and studying computer science at the University of Texas at Austin. Though his profile isn’t the traditional image of a college student, his background is not uncommon. According to the U.S. Department of Veterans Affairs, “over 1,000,000 student Veterans are using their G.I. benefits to pursue advanced educational opportunities, and this number is estimated to increase by 20% in the next few years.” Eakin is one of many student veterans who are using their benefits to further their education. His journey to Texas Computer Science, however, wasn’t serendipitous: It was years in the making.

When he graduated high school, Eakin was certain that immediately enrolling in college wasn’t the best choice for him. Unsure about postsecondary education, Eakin enlisted in the Marine Corps. At the time, Eakin had no idea that he would eventually attend UT Austin. As he reflected on the decision years afterward, Eakin remarked that he was drawn to both institutions for similar reasons. “The military was appealing to me in the same way UT was appealing because [of] the challenge aspect of it,” he said.

Once enlisted, Eakin served in California working primarily as a low altitude air defense gunner. After that, he went on a special duty assignment overseas for three years as an embassy guard. Eakin found himself working as an embassy guard in various cities such as Berlin and Cairo. During this time, he found a burgeoning interest in computer science.

Recalling what attracted him to computer science, he said “at first I was wanting to know how it all works...now it’s more of a creative thing because you can do so much with it. From graphics to web stuff, it’s just so cool to me.” He found that the more he learned about programming, the better he was able to work on everyday problems. “[Computer science] teaches you how to take problems and break them down into smaller parts that are more doable.”

He watched videos about learning to code on YouTube. “From there, I went down the rabbit hole...I started to fall in love with coding.” Eakin also began to speak with the embassy employees who worked in IT. They encouraged him to pursue computer science, Eakin remembered. “They were telling me that I should go for it because I had an interest in that field, even before I started college.”

Eakin explored the world of coding by making several apps and decided to formally study computer science once he left the military. After five-and-a-half years of service, Eakin moved to Houston, where he grew up and where his family lives, and attended a community college there before transferring to UT Austin in 2018 as a computer science major. “Who doesn’t want to be the best at what they do?” Eakin said when asked about why he decided to apply to The University of Texas.

Many people can find the rigor of university coursework overwhelming at first. Even Eakin, who had years of professional experience and a background in programming, found it to be demanding. Still, he manages by following a single, blunt-yet-efficient life mantra: “Just get through it.” For Eakin, difficult tasks are an exercise in learning to manage the rougher aspects of life. This can be traced back to his time in the Marine Corps. “The Marine Corps introduced me to the roughness of the world at a young age. Not everyone is going to be nice to you, especially in the workplace. There are other things too, like getting things done...meeting deadlines was a big thing in the Marine Corps, and that carried over a bit.” He added that while some mindsets carried over from the Marines, he had to unlearn certain mentalities. “You tend to catastrophize in the Marine Corps...like every little thing is a big deal. You can’t have that same mentality at UT...there’s going to be bad grades, there’s going to be missed deadlines. You have to learn to cope with that.”

Despite the difficult course load, Eakin finds that he enjoys his computer science classes. “I’m learning cool things that I would have never probably ventured upon in my own learning.” In addition, he has secured a summer internship with Lockheed Martin in New Mexico, where he will be doing system work and working on testing equipment.

The University of Texas at Austin has various resources for student veterans. Along with campus outreach and mental health services, there is also the Student Veteran Association for those looking for an on-campus community. Eakin has found a group of fellow student veterans whom he feels comfortable spending time with. “Here at UT, the veterans have get-togethers every week. They’re kind of like my crew,” he said.