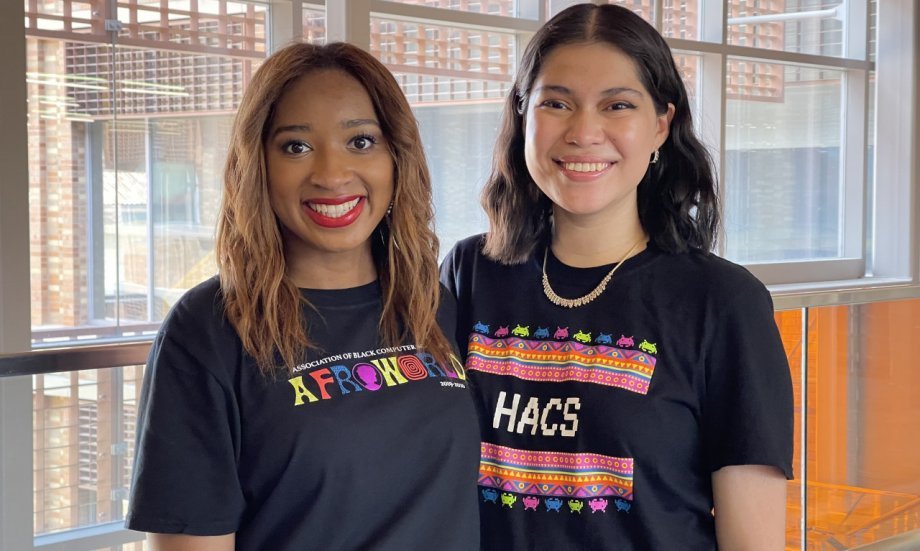 Neither Collins nor Quistiano had any computer science experience before college, but these organizations helped them find their footing at UT Austin. Quistiano said ABCS and HACS host professional, academic and social events, but they also provide a space to discuss their struggles.

Both students are also actively involved with other organizations for minority computer science students, like Q++, for LGBTQ+ students, and Women in Computer Science. Quistiano is HACS' president, and Collins is ABCS' president — they both received an Aspire Award, recognizing them for their achievements in research, service and leadership.

Black and Hispanic/Latinx students have been historically underrepresented in STEM fields, including computer science, and in the Department of Computer Science.

"I'm a first generation Latina student, I really didn't know about this whole college thing," Quistiano said. "I just searched for the best computer science schools, and UT was one of the top results… But I didn't really have anyone to ask about the process."

After graduation, both Quistiano and Collins will work as software engineers for Microsoft in Seattle. They're even working in the same building, which Quistiano called a "huge coincidence."

Last summer, after noticing that there wasn't a scholarship specifically for Black or Latinx students that was run and funded by the computer science department, Collins and Quistiano wanted to create one.

At the same time, the department was planning initiatives that aimed to alleviate the financial burden of studying computer science. The result of these efforts by students and staff is the Texas Computer Science Endowment for Change. Quistiano said incoming and current HACS and ABCS members, as well as students who have participated in the Academy for All program, are eligible to receive the award.

"Our original fundraising goal was $25,000, but we raised $41,000 for the endowment during a virtual semester," Quistiano said. "We created the scholarship at the beginning of last fall, some awards were given this spring, and more awards will be rolled out in the fall 2021 semester."

Collins and Quistiano also helped organize a bootcamp for younger Black and Latinx students in the department. They delved into a variety of topics, including choosing classes, the career paths available to them, building their brand, finding internships and succeeding in those internships.

"We were hitting so many points on how to help students," Quistiano said. "It was really a day of passing down knowledge, tips and tricks and specific encouragement."

This month, Collins and Quistiano also organized a roundtable discussion about diversity and inclusion in the computer science department with students, staff and faculty, including department chair Don Fussell.

Quistiano said the main part of the event consisted of students sharing their concerns and hardships, and the computer science leadership actively listening to them.

"As a Black woman in computer science, I experience these issues every day, but I have to remember that there are people within the department who just don't know what it's like," Collins said. "I'm proud of the roundtable because it's changing the culture of the department, it's allowing staff members and faculty members to walk away and start conversations on their own about the issues that affect us.