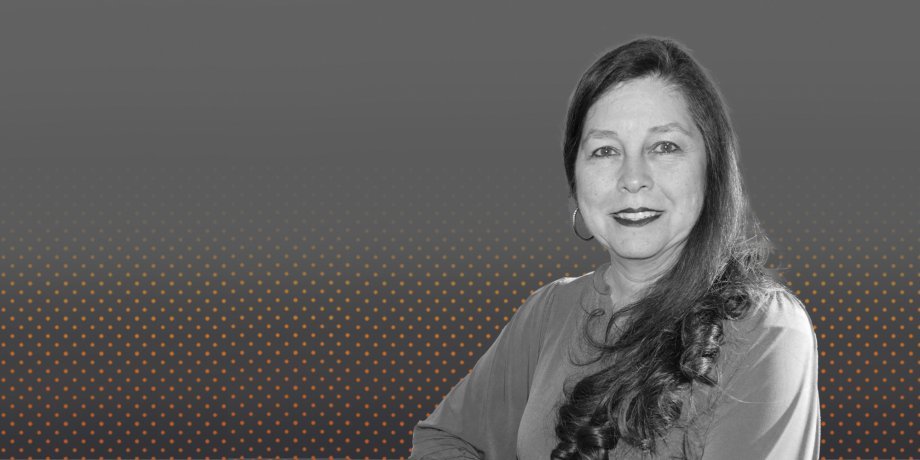 Alum Romelia Flores was born and raised in Eagle Pass, Texas along the Mexican border. When she first arrived at UT, Romelia tried out a few different majors before landing on computer science. She came in as a biology major, then declared a math major due to her love of mathematics. She thoroughly enjoyed mathematics courses, particularly calculus because the formulas and equations were natural for her to understand and logically obtain correct results. However, a definitive moment eventually mapped her career path: a fellow student asked her if she had ever taken a computer course at UT, to which Romelia replied, “What's a computer?” Her friend convinced her to take Introduction to Pascal Programming, convincing her that it would be fun. The course the pair took was taught by the now retired, Senior Lecturer Nell Dale—one of the first women to get a PhD in computer science.

“She taught us Pascal programming. It was really amazing. I took that course and remember thinking, ‘This is so much fun,’ because it was like calculus. You were given a problem and as a programmer, you provided the computer with step-by-step instructions to execute on your behalf. It was similar to solving puzzles which I’ve always enjoyed. That's why I love computer science so much!” She remembers using punch cards to “write” her programs and how even though it was arduous and time-consuming, solving problems on the computer systems gave her a sense of accomplishment. When she wasn’t at the IBM campus on Burnet, she would hang out and study with her friends at The Union and the Perry Castañeda Library, noting that friendship and community were vital to her happiness at UT.

While working on her computer science degree at UT Austin, she obtained a summer internship at IBM and continued to work there part-time as a full-time student. Her first position at IBM was as an assembly-level programmer producing technology products such as 3270 Data Streams and High-Level Language Application Programming Interface (HLLAPI). She received her Bachelor’s in Computer Science in 1982 and was offered a programming job at IBM as a full-time employee. Because she loved working at IBM, she decided to continue her career there ever since.

Romelia is now an IBM Distinguished Engineer and Master Inventor known for driving innovative projects which leverage leading-edge technology including hybrid cloud and artificial intelligence. She has obtained 73 US Patents with an additional 15 patents pending – making her one of IBM’s top innovators. Throughout her career, she has served on a variety of committees and boards including the Fort Worth Museum of Science and History Board of Trustees, the Baylor Engineering and Computer Science Board of Advocates, the Dallas Alliance of Technical Women, and the International Women’s Forum. She’s received various awards and honors including being the first female ever named to the Dallas Tech Titan Hall of Fame in 2018, winning the 2016 Lifetime Achievement Award from Great Minds in STEM and being named 2016 Latina Style Magazine Executive of the Year.

As she mentors IBMers and students, her advice to them is to find something they’re passionate about. She shares what she calls her “C's of Success.” “They’re words that begin with the letter C that make individuals successful – Competence, Communication, Commitment, Creativity, Collaboration, Confidence, Community and Chuckle.” She is a strong believer in the approach and says that following the C’s of Success will make life more interesting and more valuable in the long run.

Romelia remembers the male-dominated engineering and computer science programming staff. She has seen more women joining the workforce over the past decade, but she affirms that she would love to see additional women and minorities in her field. She serves as a role model for women and Hispanic people leading IBM’s Academy of Technology (top IBM engineers) on Diversity and Inclusion efforts. She also works with other Hispanic Executive leaders to focus on diversity initiatives for the IBM company.

Romelia’s impressive career has been able to thrive on these ideals because she prioritizes taking care of herself and doing what truly brings her joy. “One of the things that I was very focused on was getting ahead on my career, but it's really important to do something you really enjoy. People look at me, and say, ‘I want to be a Distinguished Engineer.’ And I'm like, ‘what you need to do is think about what makes you happy and position yourself in what's going to make you happy – regardless of whether it's a Distinguished Engineer position or another.’” For Romelia, true success is defined by doing what makes you happy and what drives you.