Capital Campaign Update: The Next Chapter 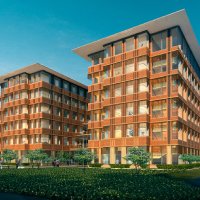 In less than a month, the fences will come down, the construction crews will pack up their equipment, and UT Computer Science will be handed the keys to its bright, shiny new home—The Bill and Melinda Gates Computer Science Complex and Dell Computer Science Hall. What a home it is! If you’ve been keeping up with this project, you’ve undoubtedly heard us brag about the state of the art research pods; the collaborative study spaces for our expanding student body; and the expanded opportunities for integrating our undergraduate with faculty research projects. It is a game-changer for UTCS.

It’s also important to point out that this project was only possible because of the private gifts from the two foundations that provided the majority of the funding (The Bill & Melinda Gates Foundation and The Michael and Susan Dell Foundation). This reflects the extent to which this department and the larger university depend on philanthropic gifts. This is true not just for large capital projects like this one; philanthropy is increasingly central to everything we do, which is why the success of the current capital campaign is so critical. 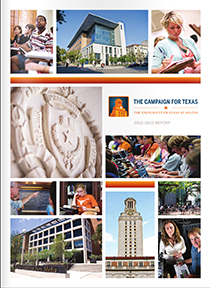 Despite UT’s classification as a public institution, state tax revenues make up a dwindling share of the university’s budget. In the 80’s, the state was responsible for nearly half all university revenue. Today? Budget cut after budget cut has taken the state’s share of university funding all the way down to 13%. The university and the Department of Computer Science have responded by tightening our belts, making some difficult decisions, but also by acknowledging that maintaining our status as a world-class university and a top-ten ranked computer science department will depend on our ability to find our resources and revenues in other places. That includes developing a strategy to make sure our alumni understand that working together to develop an expanded culture of giving lies at the heart of the future value of a UTCS degree.

Earlier this month, UT passed the $2 billion mark in its $3 billion capital campaign. That’s a tremendous milestone, and one that includes gifts from over 121,915 university alumni.

In terms of how that impacts the department, the overwhelming majority of our philanthropic support has been focused on our new building. While that is a huge accomplishment, relative to other academic units this department has comparatively little support in place for things like student scholarships and the excellence funds.

This is no small challenge. In the absence of state funding, it will be scholarships that keep tuition affordable; excellence funds that elevate strategic priorities and keep UTCS ranked among the top 10; and privately endowed professorships and chairs that allow the department to continue to recruit the faculty that are the cornerstone of our success. While the Bill & Melinda Gates Computer Science Complex is unquestionably a big step in our efforts to move UTCS forward, we must keep in mind that it is a first step among many.

As the year comes to a close, and you’re thinking about your own charitable giving, take a moment to consider how you can play a role in that future. Your gift can be critical to this well-being of UT Computer Science, to the research that changes the way we use technology, and to the scholarships that make the education you received available to the next generation. Thank you for your support.