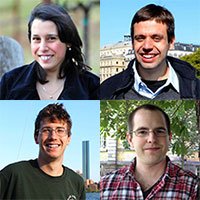 UT Computer Science is excited to welcome four new faculty members coming to campus in 2014. They all have incredibly impressive credentials and research experience, and we’re extremely grateful that they have chosen to join our family.

We encourage you to learn more about our new faculty and extend a warm Longhorns welcome when you see them on campus.

Işil Dillig is a graduate of Stanford University, where she received her Ph.D. in computer science in 2011. After completing her Ph.D., Işil worked as an assistant professor at the College of William and Mary in Williamsburg, Virginia, and later as a researcher at Microsoft Research in Cambridge, UK.

Işil’s research interests include program analysis, programming languages, and automated logical reasoning. The main goal of her research is to make software systems more reliable, secure, and easier to build in a robust way. Her recent research has addressed scalable techniques for static reasoning about pointers, path- and context-sensitive analysis, container data structures, the interplay between over- and under-approximations of program behavior, and constraint solving and simplification techniques that enable more efficient analysis algorithms.

Thomas Dillig received his Ph.D. from Stanford University in 2012, with a dissertation on “A Modular and Symbolic Approach to Static Program Analysis.” Previously he was an assistant professor at the College of William & Mary and a senior lecturer at University College London.

Tom’s main research interests are program verification and automatic constraint solving. The end goal of his work is to develop new techniques to build reliable and provably correct software systems and make costly program errors a thing of the past.

Tom has worked on several software projects, including SAIL and SATURN. SAIL is a front-end for program analysis systems that provides a two-level representation, consisting of both a language-specific high-level intermediate language as well as a low-level, language-independent representation. SATURN is a program analysis system. The goal of the Saturn project is to statically and automatically verify properties of large (meaning multi-million line) software systems.

Eric Price completed his graduate studies at the Massachusetts Institute of Technology, receiving a Ph.D. in computer science in 2013. Since then, he has been a postdoctoral research fellow at the Simons Institute for the Theory of Computing and the IBM Almaden Research Center.

Eric’s research was featured in Technology Review’s TR10 list of 10 breakthrough technologies of 2012, and his thesis was a recipient of the George M. Sprowls award for best doctoral thesis in computer science at MIT.

Etienne studies the geometry of the physics of everyday materials—how hair twists and curls, the way cloth wrinkles and folds when it is wrung out or balled up, and the relationship of a stone building’s shape to its stability. By blending computer science, applied physics, geometry, and numerical methods, he turns insights about the geometry of these materials into more accurate and efficient computer algorithms for simulating them, and for interactively designing objects built from these materials that takes into account not only the intended form but also the intended function.

Special effects studios Disney and Weta Digital have used Etienne’s work on cloth and hair simulation in movies such as Tangled and The Hobbit. He was awarded an NSF Postdoctoral Research Fellowship in applied mathematics for the year 2013-2014, and his work on Asynchronous Contact Mechanics, a framework for simulating the behavior of cloth under contact, was featured in the 2012 Communications of the ACM Research Highlights.