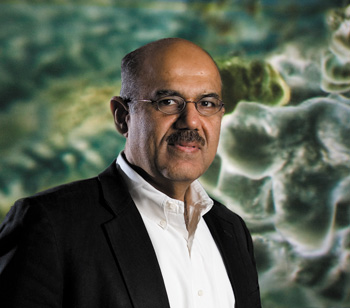 The award committee wrote, "Chandrajit Bajaj has made fundamental mathematical and computer science contributions to a wide array of computational sciences, including geometric and solid modeling, image processing, computer graphics, data analysis and visualization. He has been prolific in each of these subfields, progressively focusing and mastering the sub-area over his three decades of academic research, education and service activities." He is a Fellow of the American Association for the Advancement of Science (AAAS), a Fellow of the Association of Computing Machinery (ACM), a Fellow of University of Texas Institute for Cellular and Molecular Biology (ICMB), and a Fellow of the Institute of Electrical and Electronics Engineers (IEEE). He has won the University of Texas Faculty research award, the Dean Research Assignment award, the ICMB research award, and also twice won the University of Texas Moncreif Grand Challenge research. He has chaired and co-chaired over 10 SIAM, ACM, IEEE conferences and workshops and has given over 15 keynote addresses. He has been an associate editorial member of SIAM Journal on Imaging Sciences, and ACM Transactions on Graphics, and continues for ACM Computing Surveys and Intl. Journal of Computational Geometry and Applications. A majority of his PhD’s and postdocs are now faculty in academia, DOE national labs or geometric processing/meshing companies and remain intimately involved in geometric, solid modeling and computational visualization activities.