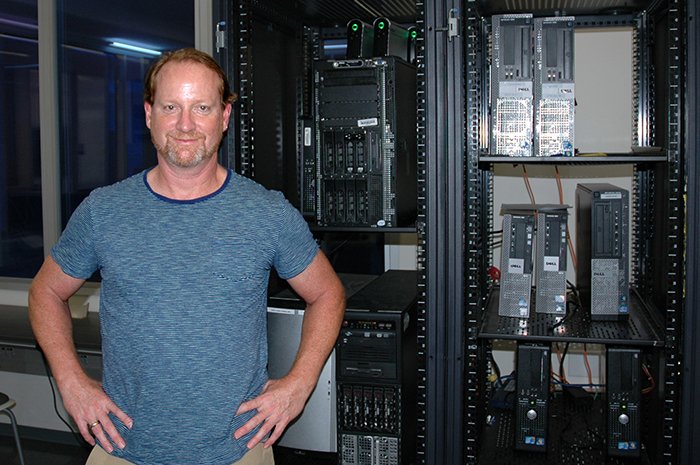 Chris Rossbach didn’t take a common path to computer science research. He tried out physics, philosophy, math and religious studies before graduating from Stanford University with a computer science degree.

Rossbach didn’t see a job for himself in computers, though, so he became a professional musician and yoga teacher. However, after 13 years of working more and more with computers in his spare time, he finally decided to pursue computer science as a career.

“Many people come to realize who they are as a professional much quicker, but at least I have a high confidence result,” he said.

Rossbach joined UTCS this fall as an assistant professor. He currently studies operating systems and how to reorganize systems to work better. He solves problems with these systems by looking at how all of the parts fit together.

“This is one way of really saying, I’m interested in operating systems, because that’s what a computer operating system does,” he said. “It’s the layer that makes all the things you can see work together.”

“That was a lot of work but a lot of fun,” he said. “I like to build big systems that potentially take many years, but that solve really large-scale problems and interact with lots of layers of technology.”

He started out by playing with new technology in order to see what it can do and how it can improve. One of these past projects was finding a more intuitive input method for 3D cameras.

“As I got deeper and deeper into that problem, it turned out to be much less about the snazzy new camera that attracted me and much more about the structure of all the components,” he said. “It turned out to reveal what I think are some fundamental flaws in the way modern operating systems are currently designed.”

Computer scientists need to change the way they think about OS structures in order to adapt to new technology, according to Rossbach. Adapting basic CPU systems with traditional storage and network systems doesn’t work that well anymore, he said, because of more specialized hardware and software in devices like cell phones and the trend towards moving information to distributed cloud systems.

“I think we’re now at a point where it’s just not going to fly anymore,” he said. “We keep just hacking at the problem and making piecemeal changes. These two forces of lower-level specialization and higher-level distribution are in tension, and they’re pulling apart at the seams the fabric that has been around for a long time.”

“I feel like it’s a good time to be working in this area,” he said. “It’s easy to make a splash, because there’s so much openness in the problem space. If [students] are interested in operating systems, come talk to me, the door’s always open.”