Q&A with Peter Stone: Where is Artificial Intelligence Headed?

Peter Stone, a professor of computer science at The University of Texas at Austin, led a groundbreaking study on artificial intelligence (AI) being released today. The study, produced by a panel of 17 experts from around the world, looks at how specialized applications of AI might affect life in a typical North American city by the year 2030. 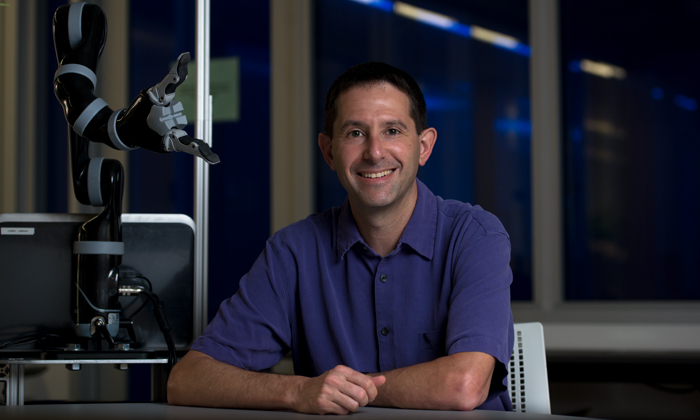 Those of us who don't work on AI have ideas about what might be coming in the next 15 years. But you have an insider's perspective. What kinds of things are coming that will have a big impact on society, yet are not even on most people's radars?

At this point, some of the upcoming transformations in transportation are already on most people's radars. However, I think people are less aware of the potential transformations in home robotics, natural language dialogue systems, and healthcare, just to name a few.

For example, it's possible that we will begin to see home and service robots that go far beyond vacuuming our floors, with the ability to understand human speech, visually identify people and objects, and manipulate objects with arms and grippers.

In healthcare, we may see AI-powered assistants helping doctors match symptoms to known diseases, AI systems that use clinical, environmental, and social data from millions of patients to develop more personalized diagnoses and treatments, and an expansion in automated systems performing surgery and caring for patients.

Across many areas of life, the ability to interact with machines conversationally, rather than by typing narrowly defined commands and pushing buttons, will have a profound impact on the way we live.

For any of these possibilities to become reality, there are still significant technical challenges to meet, as well as social, institutional, and legal barriers to overcome. The report compares and contrasts these challenges and barriers across the various domains. But in all cases, the potential payoffs are huge, so motivation should be high.

What kinds of AI applications are you most excited about seeing come into common use by 2030?

Personally, I'm most excited about the possibilities in transportation and service robotics, if only because that's where my biggest research contributions have been, and continue to be. I have been involved in research on autonomous driving since 2003, long before most people imagined they'd be feasible in the near future. I also entered a car in the DARPA Urban Challenge.

I'm also very deeply involved in research on service robotics, which serves as the topic for my current Freshman Research Initiative stream.* My students and I are investigating algorithms for long-term autonomy in human-populated environments.

[* The Freshman Research Initiative is a program at UT Austin's College of Natural Sciences that gives first-year students the chance to initiate and engage in real-world research experience with faculty and graduate students.]

We've seen more and more AI applications in daily life, and many more wonders are promised by science fiction. What kinds of things probably won't come true, at least not by 2030? (I'm still waiting for that flying car we were promised in the 1950s)

Well, flying cars aren't out of the question. At least one or two startups are going down this path. But I think the main thing that the general public doesn't understand is that there's a huge technical difference between AI technologies that are developed and targeted towards specific application domains and general purpose AI that can be sprinkled on top of any device to make it more intelligent. The former is the focus of much research and business development, but the latter is still science fiction. It is quite tempting to think that if AI technologies can help drive your car, then they ought to also be able to fold your laundry. The reality is that these two applications require very different algorithms and capabilities. They may both be possible. But they will require very separate, sustained research thrusts.

What are some of the biggest potential negative impacts of AI in the next 15 years and what can citizens, organizations and governments do to reduce those risks?

As with any technology, AI-based technologies have potential for both positive and negative uses. This is treated extensively in the AI100 report. The goal is to give a balanced and realistic view of both the positive and negative potential impacts of AI technologies. For example, it's conceivable that AI applications used in public safety and security applications could exacerbate and codify some of the biases inherent in human decision-making, for example by training from data that reflects these biases. But if carefully developed and deployed, AI technologies could also mitigate these biases.

With regards to what citizens, organizations, and governments can do to help ensure positive outcomes, that is the main focus of Section III of the AI 100 report. In particular, the Study Panel suggests that pathways be defined for accumulating expertise about AI at all levels of government, and that we guard against the impulse for over-regulation, which is likely to do more harm than good. But as the report emphasizes, the time is right "for social debate on how the economic fruits of AI technologies should be shared."

And finally, the question on everyone's mind, are smart machines going to take over the world?

No. Not in the foreseeable future.

It's not that I take this question lightly - it's a sensible question to ask. But the reasons I don't think it's likely are summarized in my answers to the previous two. We're nowhere near the development of what people refer to as general-purpose AI, and, there are steps we can take now to maximize the chances that AI technologies will do more good than harm. As with any technology, there are risks and challenges, but I wouldn't be devoting my career to the study of AI if I didn't believe that the societal influences would be, on balance, positive.

To learn more about the study, read our press release: Experts Forecast the Changes Artificial Intelligence Could Bring by 2030