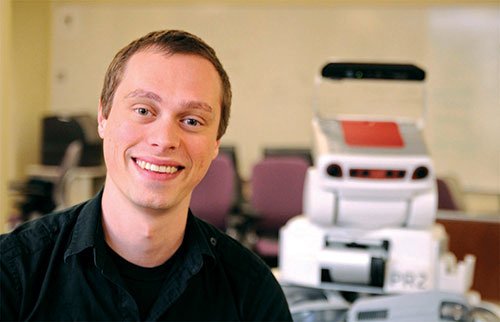 UTCS Assistant Professor Scott Niekum has known he wanted to study artificial intelligence since he was 19 years old.

As an undergraduate at Carnegie Mellon University, he rode the bus an hour each way to get to his internship. To pass the time, he read Douglas Hofstadter’s Gödel, Escher, Bach, a book that explores, among other topics, artificial intelligence and the emergence of consciousness.

“It was that book that really got me interested to the level of me thinking, this is something I really want to do someday,” Niekum said.

Niekum uses machine learning to teach robots from human demonstrations. As the director of the Personal Autonomous Robotics Laboratory, he and his fellow researchers test methods for training robots to do everyday human tasks from cleaning to assembling IKEA furniture.

Niekum’s research focuses on using demonstrations to show robots what to do instead of programming each behavior with code. If it learns from demonstrations, a robot that has been deployed in a home or workplace will not require a robotics expert to add to or change its programming.

“Even for experts, it’s really hard to sit down and write code that describes, what is a good tennis swing?” Niekum said. “It’s much easier to leverage expertise that people already have. You take somebody who is decent at tennis, and if they can show the robot how to do the task, it’s much easier to capture human intuition … than try to write down some set of rules for what makes a good tennis swing.”

Artificial intelligence could make people more productive and improve lives by means such as by taking care of people and improving medical diagnoses, according to Niekum.

“We can use AI algorithms to optimize our supply chains and distribution networks, help us optimize farming and understand our own genomes better,” he said. “It’s going to revolutionize virtually every area of society that can be optimized or statistically analyzed in some way. It’s going to really give us a superhuman understanding of almost every aspect of our lives.”

Part of Niekum’s work is figuring out how to make artificial intelligence and robotics as safe and reliable as possible. One of his goals is to have robots “in the wild” in homes and workplaces that not only learn from their mistakes, but can automatically call up experts when they run into a tough problem.

“We’re figuring out ways where we can actually give strong probabilistic guarantees about how safe some policy is to deploy out in the real world,” Niekum said. “In the next five years, I would really like to see, at least in the Austin area, a pilot program of autonomous robots in people’s homes that can be taught by demonstration reliably … before we have software that works 100 percent autonomously all the time. If we want to wait for that, we’re going to be waiting for 30 years.”

One of the misconceptions about AI is that it will replace humans in the workplace. However, Niekum explained that robotics and artificial intelligence still have difficulties with certain tasks, such as manipulating tiny objects, in fields like cell phone manufacturing.

“What I think we’re going to see happen in the near-term is that robots are going to augment us a lot,” he said. “They can supplement humans by doing tedious or difficult work, or work that’s too dangerous for humans to do, like going into a nuclear reactor that’s melting down. You’ll see humans and robots collaborating in a lot of tasks, and you’ll see our capabilities as humans augmented a lot, but it’s not just going to be a full-scale replacement.”

Advancements and applications of breakthroughs in the field of artificial intelligence move quickly, and Niekum’s goal as a professor at UT is to train the next generation of researchers to think critically about machine learning.

“I want to bring up students that are diverse enough both in machine learning and in mathematics in general so that they can figure out what that next big breakthrough is going to be,” he said.