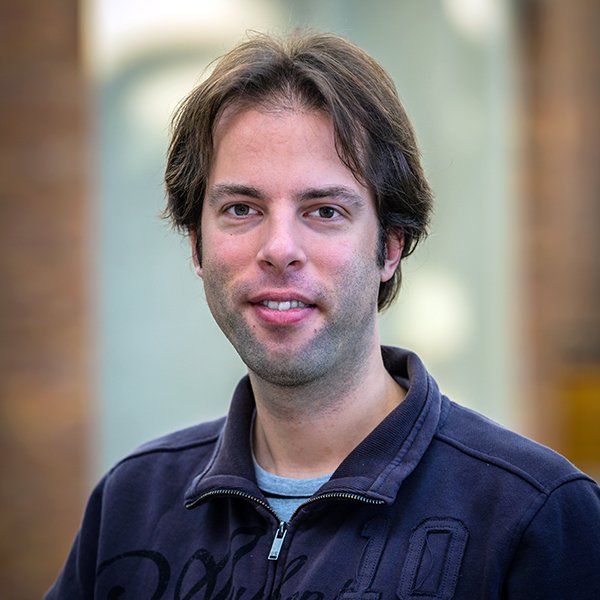 As an undergrad at the Carl von Ossietzky University of Oldenburg in Germany, UTCS professor Simon Peter had two main hobbies: music and computer operating systems. While majoring in computer science, he also completed a minor in music.

For a while, he was even interested in working on music synthesizers; his dream project is an operating system for synthesizers.

“I eventually decided to go the operating systems route for my Ph.D., but it’s a possibility I could have been a synthesizer engineer,” he said. “Music can be very rigorous and mathematical in the way that it’s expressed. From the practical side, there is a lot of engineering to music, [such as] sound engineering.”

Peter works on the efficiency and reliability of data centers at all levels of problems, from routing around failures in data centers to the energy efficiency of servers.

His current research, which he had just started a couple of years before coming to UT last fall, focuses on helping servers improve efficiency so that they can deal with large amounts of data going in and out of servers. This is called called IO, or input/output, efficiency. Peter explained that computers were originally designed with the assumption that processing capacity is fast enough, but IO paths in and out of the servers didn’t need to be as fast. However, as the use of data centers becomes increasingly popular, more and more people are accessing and entering more and more data in a server, leading to more requests to these servers.

“The data centers themselves have become this driver of the economy, so everybody in society in one way or another is using data centers these days,” Peter said. “So, the amount of data that goes in and out of the individual data centers is becoming larger and larger and servers are becoming overwhelmed, and that’s because they have not really been built with that in mind.”

For example, his research involves working to redesign the operating system for faster IO devices.

“Hardware architects have been building better and better networking and storage technologies that become faster, but there are still a few pieces missing,” he said. “One piece is the design of the operating system, which has become a bottleneck to all of this because it was totally designed with the assumption that IO devices are slow.”

Data centers are becoming more important because everyday applications such as email and webs searches use data centers, according to Peter.

“We have transformed into a completely digital society, and everybody’s making use of digital services,” he said. “The main driver to all of this is that society has basically become dependent on the data center.”

“That was a big thing for me when it came out, because it was freely available, anybody could play with it and try to make it better,” he said. “I had done this as a hobby for some time, and once I had discovered that you can do this as a Ph.D. and do research in this, I was hooked.”

This spring, Peter introduced a project-based operating systems class to undergrad CS students. In the class, students are given the beginning of an operating system and have to build the rest themselves.

“I will give them a little bit of guidance, especially in the beginning there will be some milestones that they have to complete,” he said. “Towards the end, it will become more and more freeform and they can go off and design it in the way that they like.”

To finish the class, they had to present and defend their operating system to Peter and the teaching assistants in order to practice how computer scientists and engineers must defend their work while researching or working in the industry.

“I strongly believe that in a practical kind of science like systems, you learn best by doing things rather than reading a book about it,” he said. “It’s really important that students actually work on and implement a small operating system in this class to learn more about how low-level systems engineering is done.”

As a researcher, Peter likes interacting and collaborating with colleagues both in academia and in the industry. He said in operating systems research, collaboration is helpful because systems problems can become very complex and require a lot of implementation work.

“You work in teams on most of these problems rather than just being by yourself and studying it by yourself,” he said. “Basically, in order to get things of this scale done, you can’t do it all on your own, you have to be able to work with other people.”