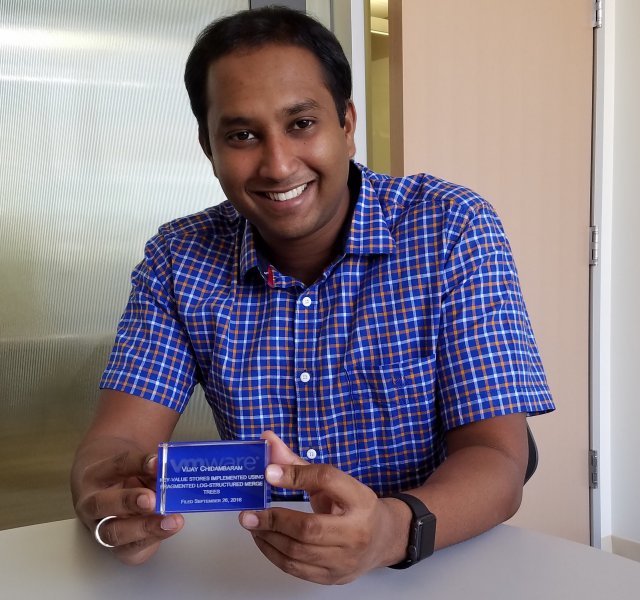 Vijay Chidambaram did not start off wanting to go into research.

While earning his Bachelor’s from the College of Engineering, Guindy in India in 2009, Chidambaram focused on his goal of nabbing a job at a big company. After an internship during his Master’s studies, Chidambaram realized that working as a software engineer did not appeal to him as much as he expected. He felt there was a better way for him to impact the world.

As a Master’s student at the University of Wisconsin-Madison, Chidambaram discovered a passion for teaching and research. He found that he enjoyed the high level of control he had with his work while having flexibility over the topics his research covered.

Chidambaram focused his research on operating systems at the University of Wisconsin-Madison and did several research-based internships with Microsoft before graduating with a Ph.D. in 2015. Thereafter, Chidambaram brought his expertise to VMware, building an innovative tool that impacts future applications for non-volatile memory technologies by providing an easy-to-use-framework for their development.

In Fall of 2016, after his research at VMware, Chidambaram seized the opportunity to become an assistant professor at UT Computer Science. “UT has a great computer science department,” Chidambaram says, “and the surrounding area is a great place to have an interesting life outside of CS.”

In the short time that he has been at UT, Chidambaram has done many notable things for the department. Working closely with the faculty and staff, Chidambaram has helped design an upper division elective in the area of computer systems as well as give feedback on the designs on two to three other classes that will be implemented in fall of 2017. “He has helped design new classes for students who want to continue to pursue studies related to our classes for 429 and 439,” Director Bruce Porter says.

Additionally, Chidambaram helped establish a research lab where his research students can focus on topics related to operating systems, such as file systems, distributed systems, and virtualization. “There’s a lot I hope to do in my time here,” Chidambaram says. “I hope to revamp the computer science syllabus and help students get hands-on experience in topics I will teach, such as virtualization, or how storage works. Additionally, since technology is moving so fast, I want to build a strong research group, not just purely academic, where research will affect the industry.”

As a researcher, Chidambaram’s work has not gone unnoticed. Just last year, Chidambaram received the widely acclaimed SIGOPS Dennis M. Ritchie Dissertation Award for his doctoral dissertation in “Orderless and Eventually Durable File Systems”.  In that dissertation, Chidambaram presented a method to decouple the ordering of streams of data from durability. So, even when an operating system loses its power, data does not disappear. In doing so this discovery was able to improve the performance of machines by over tenfold.

Not long after that, Chidambaram was also awarded a Best Paper Award by FAST organizers and USENIX for his research in collaboration with researchers at the University of Wisconsin-Madison, Application Crash Consistency and Performance with CCFS (an overview can be found in The Morning Paper’s blog). In his research paper, Chidambaram and his team were able to recognize the abstraction of a stream and guarantee, with streams of data, that the ordering of that data would be set.