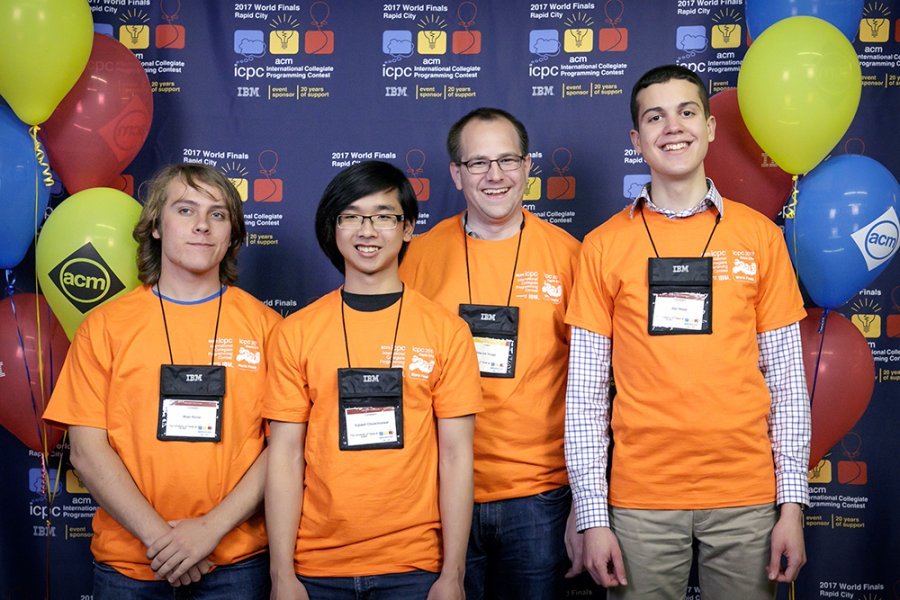 On Wed, 24 May 2017, the UT Competitive Programming team competed at the ACM-ICPC World Finals, the oldest, largest, and most prestigious programming contest in the world, at the South Dakota School of Mines & Technology in Rapid City, South Dakota.

The competition consisted of teams from 133 regions across the world (approx. 532 students) trying to solve 12 programming problems of varying levels of difficulty in 5 hrs and 20 min. The first-place team, St. Petersburg University, solved 10 problems. UT solved 4 problems and tied with 53 other teams for 56th place. In total, a record 50,145 students competed in regional competitions worldwide, and of the 532 students who made it to the world finals, the UT team of three students finished in the top half.

Teams consist of three students. The students on the UT team were Alex Meed, Brian Richer, and Supawit Chockchowwat; the faculty coaches were Etienne Vouga, Glenn Downing, and Shyamal Mitra.

The ACM International Collegiate Programming Contest (ICPC) is the premiere global programming competition conducted by and for the world’s universities. The competition operates under the auspices of ACM, is sponsored by IBM, and is headquartered at Baylor University. For nearly four decades, the ICPC has grown to be a game-changing global competitive educational program that has raised aspirations and performance of generations of the world’s problem solvers in the computing sciences and engineering.

The ICPC traces its roots to a competition held at Texas A&M in 1970 hosted by the Alpha Chapter of the UPE Computer Science Honor Society. The idea quickly gained popularity within the United States and Canada as an innovative initiative to raise the aspirations, performance, and opportunity of the top students in the emerging field of computer science. The contest fosters creativity, teamwork, and innovation in building new software programs, and enables students to test their ability to perform under pressure.

Since IBM became a sponsor in 1997, ICPC participation has increased by more than 2000%.

This year ICPC Regional participation included 46,381 of the finest students and faculty in computing disciplines from 2,948 universities in 103 countries on six continents. A record 50,145 students and 5,073 coaches competed in ICPC and ICPC-assisted competitions this year, setting new records in participation.