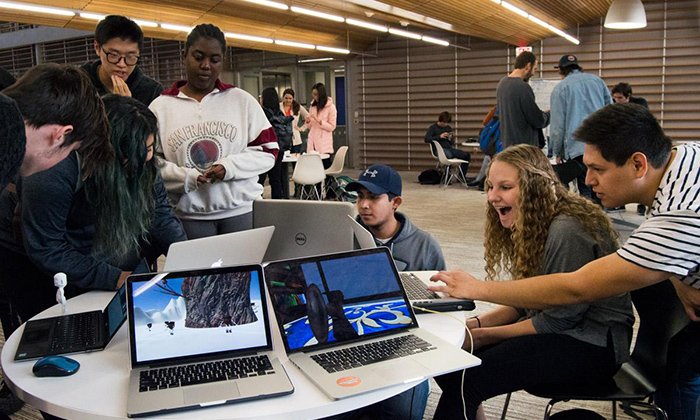 The UT Game and Mobile Media Applications (GAMMA) program was established six years ago upon a simple principle: humans like to play.

"Play is actually how we do everything to advance our lives, including in science," Paul Toprac, associate director of GAMMA, said. "We seem to forget about this idea of play when educating people, but games are a structured way of thinking about play."

GAMMA, a collaboration between the College of Natural Sciences, the College of Fine Arts and the Moody College of Communications, is an undergraduate certificate program that prepares students for careers in designing video games and mobile apps. As an interdisciplinary initiative that blends expertise from all three colleges, the certificate program gives students opportunities to apply both computing and creativity toward the production of apps and games that are useful and entertaining.

Of the students who have completed the GAMMA program, 93 percent have received jobs within six months of graduation, 90 percent of which are within the student's own major.

"Although the core of it is the computer science aspect, you can't really make a game without art, design, animation and all these other things as well," Toprac said. "The cool thing is that the programmer has to learn how to talk to an artist, and the artist is going to have to learn how to talk to a programmer. GAMMA really teaches students 21st century skills of communication, collaboration, creativity, commercialization and commitment."

Computer science senior Adam Leslie, who is currently in Toprac's Capstone course and president of UT's Electronic Game Developers Society (EGaDS), said the program allowed him to develop the necessary skills for pursuing a career in game development.

"I never seriously considered becoming a game developer before, but I found myself really enjoying the process of creating something and seeing it, and also seeing people interacting with it for their own enjoyment," Leslie said. "The constant innovation in the space of game development and programming in general means there's always something new to learn, which I love, and I find the creative side of things very compelling."

The course, which is operated like a studio, allows students to better understand the fundamentals of working in the industry.

"The industry really appreciates the work that these students have done, and they're amazed that the students are studio-ready," Toprac said.

The program also hosts career fairs, through which students can network with different companies in game development. This past summer, Leslie completed an internship with a local virtual reality (VR) startup called FarBridge, through which his latest game was released.

"The career fair was a big help, as it's where I got my internship, and the project-related classes here at UT have made me all around more capable," Leslie said. "The GAMMA program's game capstone course is the pinnacle of that."

The final products are published online, where anyone can download the games for free. According to Toprac, one of the games have gone on to become one of the highest-rated free games of its genre on Steam, a popular online game publishing platform. Another game was a finalist at the College Game Competition at E3, the premier trade event for the video game industry, and one was named a finalist just this month in the Intel University Games Showcase at the Game Developers Conference, the premier video game professionals event.

"The students want to be proud of the game they make, because they know their names are going to be attached to it," Toprac said. "The students often put in way more hours than they'd normally do for a course because they're in a team, they like the game that they're making, and they all want to make a good game."