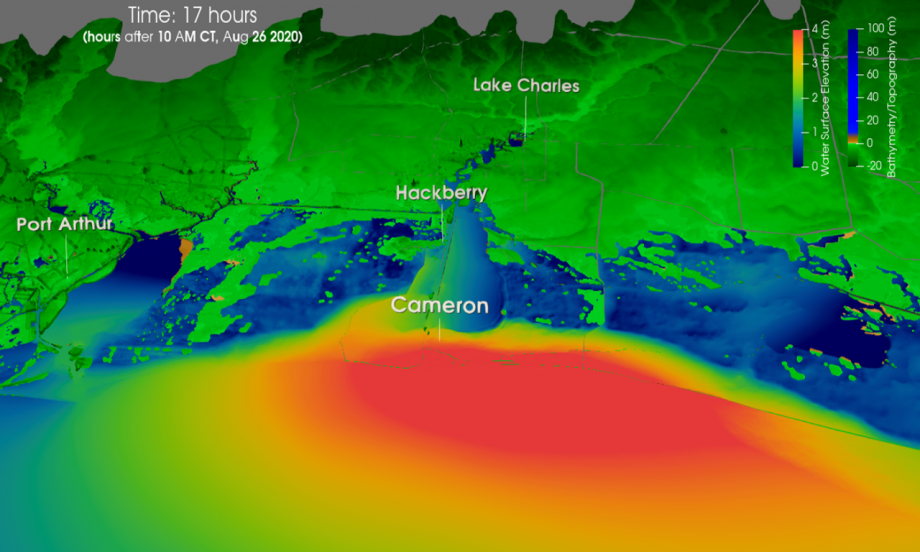 Predictive science is crucial to the prediction and modeling of extreme weather. This is a visualization of predicted storm surge on the Louisiana coast caused by Hurricane Laura, the Category 4 Atlantic hurricane that struck Texan shores earlier this year. Credit: Computational Hydraulics Group, Oden Institute.

Many of the decisions we make are now guided by computational simulations, from designing new spacecraft to predicting the spread of a pandemic. But it's not enough for a simulation model to just issue predictions. A decision-maker needs to know just how much those predictions can be trusted.

This is the objective of research in the critical area of predictive science, which is about to take a major step forward at The University of Texas at Austin. The Oden Institute for Computational Engineering and Sciences has been selected by the Department of Energy (DOE) to establish a Multidisciplinary Simulation Center, with the mission to develop the next generation of exascale predictive simulation capabilities. The center will support the research of dozens of scientists, post-docs and students, and will foster close collaboration with researchers at Sandia National Laboratories, Los Alamos National Laboratory, and Lawrence Livermore National Laboratory.

Bob Moser and George Biros from the Oden Institute and UT's Walker Department of Mechanical Engineering are leading the team of 18 faculty and senior researchers from six different departments, which also includes a faculty member from Texas State University. The new center is part of the Predictive Science Academic Alliance Program (PSAAP) and this is just the third time that PSAAP centers have been awarded by the DOE National Nuclear Security Administration (NNSA) since the program's inception in 2008. UT Austin was one of only four institutions nationwide to be selected to establish a Multidisciplinary Simulation Center.

"This shows the power of collaborative research and how it allows us to take on grand challenge problems," Moser said. "The challenging research agenda called for by the DOE can only be achieved by drawing on strengths across campus in computational science, computer science, physics modeling, uncertainty quantification and physical experiments."

The group will focus on developing predictive simulations of an inductively coupled plasma (ICP) torch in unprecedented detail. These torches have many applications, from advanced manufacturing to destruction of hazardous waste. Currently, an ICP torch experimental facility developed at UT Austin is being used to test materials for use on future spacecraft.

Simulating the torch, however, is a means to a greater end. "It is a way to achieve the primary objective of the center: advancing predictive science capabilities," Moser said.

Oden Institute researchers will develop capabilities for predictive modeling and simulation of the plasma torch, while researchers from the Cockrell School of Engineering will conduct physical experiments. A key goal of the project is to combine the power of simulation and experiment to improve predictive capability.

The center's capacity to advance predictive science is enabled by the supercomputing power and expertise available at the Texas Advanced Computing Center (TACC). Using systems such as TACC's Frontera (the world's most powerful academic supercomputer) in tandem with the DOE's high-performance computing systems, the new predictive science center will also advance exascale computing: the next generation of the most powerful high-performance computing systems.

"TACC's exceptionally powerful computing resources will enable us to design and test novel exascale algorithms," Biros said. "We anticipate discoveries in computer science, HPC and computational science that could have a profound impact on large-scale simulations, especially on advancing more reliable predictions of complex systems."