Assistant Professor Peter Stone and his team of students are headed to Padua, Italy, for the 2003 RoboCup. 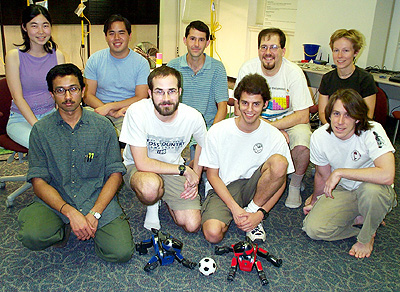 Peter is co-founder of the 4-time world champion CMUnited robotic soccer team. Much of his research has been applied to the CMUnited simulator team. He also created the ATTUnited-2001 and United-2002 teams. He is currently organizing the new UT Austin Villa robocup teams. Peter says, "Aside from being a lot of fun, robotic soccer is a great domain for studying several artificial intelligence issues, including multiagent systems, machine learning, and real-time planning. I am using this domain as a testbed for my research on multiagent systems and machine learning." Visit the Robo Soccer homepage for more information on this interesting area of Artificial Intelligence.

RoboCup is an international research and education initiative. Its goal is to foster artificial intelligence and robotics research by providing a standard problem where a wide range of technologies can be examined and integrated. The concept of soccer-playing robots was first introduced in 1993. Following a two-year feasibility study, in August 1995, an announcement was made to introduce the first international conferences and soccer games. In July 1997, the first official conference and game was held in Nagoya, Japan. Followed by Paris, Stockholm, Melbourne, Seattle, and Fukuoka, the annual events attracted many participants. Following previous conferences and games, the 7th RoboCup will be held in Padua, Italy. Today, more than 3,000 researchers from 35 countries and regions are participating in various projects such as international games, conferences, research and educational programs. Visit the RoboCup 2003 web page and UT Office of Public Affairs for more information.