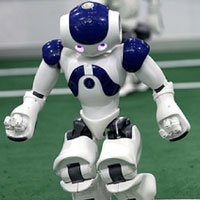 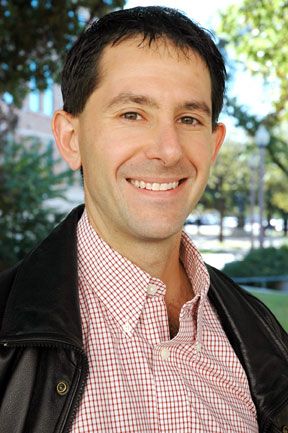 Texas Computer Science students are programming robots to play soccer... and winning. Current robots are only 2-feet high, but the goal is to develop robotic players large and skillful enough to beat a real-live World Cup team by 2050. Students from Texas Tech (TT) and The University of Texas at Austin (UT) use C++ to program robots to play without human interaction during the games. The robots play as a team and make individual decisions.

Student programmers are members of the TT and UT Austin Villa, a cross-institutional team that helps students solve real-world problems in artificial intelligence. UT professor Peter Stone, TT professor Mohan Sridharan (UT-Ph.D. '07), and UT Postdoc Dr. Michael Quinlan lead the team in the Standard Platform League (SPL). In the SPL, each team competes with identical Aldebaran Nao robots. Since the hardware is identical for all teams, the focus is on the programming. 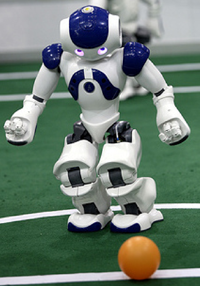 "I have been involved with soccer most of my life,'' says Stone. "I played on my college team and some semi-pro. While I was in graduate school at Carnegie Mellon, I combined my interest in soccer and technology by co-founding a robot soccer team. It sounds frivolous, but it takes advanced programming skills to play robot soccer. Small variations in lighting can totally throw a player's ability to accurately perceive its surroundings. Movement has to be stable and fast with quick direction changes. It's quite a challenge.''

Students compete in simulated and real robot soccer. The robots are programmed to sense their environments, make a decision about which action to execute, execute it, then determine if the action was successful. In research terms, they are interacting as independent agents in a multiagent system and learning through trial and error—or through reinforcment learning. 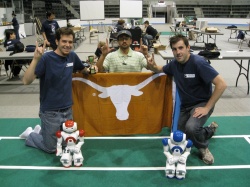 "Put simply, our robots need to work as a team,'' says Stone. "It is it not enough for each robot to want to score a goal—if we did that, there would be just a big pile of robots trying to get the ball. Our robots need to work with each other, and against the other team, at the same time.''

Stone still plays winning soccer. He is in the open division in Austin's premier amateur league and his students won the 2009 RoboCup US Open championship. For video and more information, see http://www.cs.utexas.edu/~AustinVilla/.