Source: UT News | From "Driving the future of research"

The future looks like this: You are sitting in the backseat of the car drinking coffee and reading the news on your tablet. 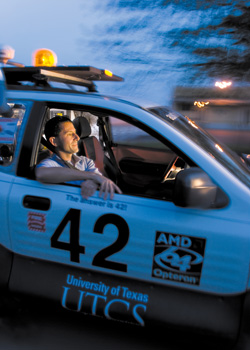 The car drives itself, and it careens through intersections with no stop signs and no stoplights, barely missing the hundreds of other autonomous vehicles buzzing through the intersection at the same time. There are no traffic delays.

Computer scientist Peter Stone‘s research is leading us to this future, and he says it is near.

His research focuses on developing systems in which artificially intelligent (AI) vehicles coordinate with one another at intersections, speeding themselves safely and quickly through our cities.

In a new virtual system he recently created, AI driver agents “call ahead” and reserve space and a time at an intersection, an arbiter agent – called an “intersection manager” – approves the request, and the vehicles move through seamlessly.

Hold on tightly. That first time through the intersection is going to be a screamer.