Computer Science vs. Cancer: How Precision Medicine is Turning the Tables on Cancer

There are few things as full of anxiety, heartbreak, and anguish as finding out that you or someone you love has cancer. Unfortunately, it’s not at all uncommon. By the American Cancer Society’s estimates it is expected that in the year 2015 alone, there will be 1.6 million new cancer diagnoses and nearly 600,000 deaths—or roughly 1,600 people every day. But statistics are hardly necessary to realize the enormity of the problem. So far, the road to a cure has been long and complicated and with what’s seemed like no end in sight—until recently. After other fields haven’t quite hit the mark, humanity has summoned its most promising contender yet: computer science. Leading part of the charge in the computation diagnosis and treatment of cancer is our very own distinguished faculty member, Dr. Chandrajit Bajaj. 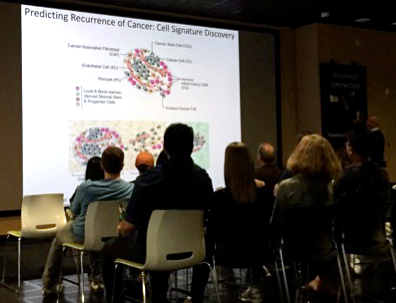 This past Thursday, Texas Computer Science alumni, graduate students, and faculty gathered in the Visualization Laboratory of the Peter O’Donnell, Jr. Building to hear Dr. Bajaj speak on the cross-section of technology and cancer research. To quantify progress in a relatable way, the fight against cancer was analogized to a football game and the attendees of the talk were introduced right around halftime, when the score looked similar to the score at a Texas game this season. 24 to 3, cancer was up and humanity had a lot of catching up to do. Things weren’t looking so good—that is until the computational sciences stepped in.

To level the crowd’s understanding of cancer and provide some background on his work, Bajaj began the talk with a brief overview of what exactly cancer is and some of the open problems that had not been solved by earlier methods – the most important of which was how each case of cancer was heavily dependent on the individual and how increasing the accuracy and efficacy of diagnosis and treatment would be nearly impossible without more computation. In particular, every case of cancer generally consists of 5 or 6 subtypes of cancer, each sufficiently unique to require special consideration in treatment. An interesting point was made crediting the success of physicists to their devotion to mathematics and imploring biologists to adopt a more mathematically sophisticated approach in their practice. It then followed that if everyone’s case of cancer was different, the way we diagnosed and treated it would need to be dynamic and adaptable and would require a much higher magnitude of mathematical complexity. This idea laid the ground work for what Bajaj called precision medicine—the paradigm shift that is at the core of his work. 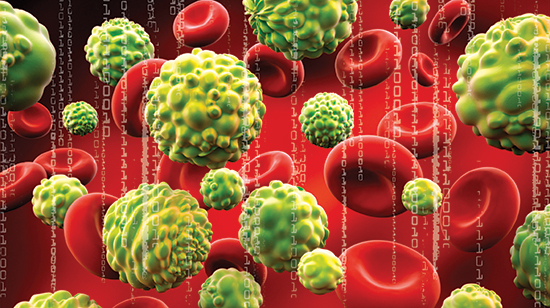 Precision medicine—particularly data-driven precision medicine—involves the usage of data from all facets of an individual, from genome sequencing to lifestyle health metrics to environmental exposure, in the diagnosis and treatment of a disease. Bajaj’s work in data-driven diagnostics was presented as purely computational where ideally no manual decisions would be made. “Given the right process, the data will speak for itself,” said Bajaj. In making diagnoses more effective, Bajaj’s methods spanned microscopy, spectroscopy, and machine learning in their scope. The process he was focused on involved chemical imaging of examined tissues in order to gather pertinent data with which specialized statistical modeling algorithms could provide smarter insights and predictions in diagnosis. The culmination of the work will eventually be a software suite with which physicians and researchers could perform their own analysis.

Aside from his current work, Bajaj described a number of touch downs made by computer science in the fight against cancer in just the last five years, including the availability of enormous databases of “healthy” genomes, the nearly trivial cost of a genome mapping (roughly $100), and the combinatorial specialization of drugs for treatment. As the talk ended and the audience was fast-forwarded to the present, the score was updated to 27-17—cancer was still up, but not by nearly as much. When asked how close we were to curing cancer, he was confident that the pace of progress has certainly accelerated and that if there was a time to be hopeful, it’s now. When pressed for a slightly harder numerical prediction, Bajaj postulated optimistically within a decade. No one knows what the future has in store, but if current trends continue, his prediction may hold.

His advice for the next generation of computer scientists who’re up for one of the greatest scientific challenges of our time? “Learn to be part of a team. In all cases, you will be working in teams, so you don’t have to be a renaissance scientist anymore. Adapt to the language of other disciplines—at least enough so that you can play.” The meshing of disciplines has rapidly accelerated our progress. Humanity is counting on this meshing to one day reach the cure.