Researchers Tackle The Dark Side Of Moore's Law

This month marks the 50th Anniversary of Moore's Law, an observation that every couple of years, computer chip manufacturers manage to squeeze twice as many transistors onto a computer chip. Because transistors are the tiny on-off switches that perform calculations and temporarily store information, Moore’s Law also embodies the exponential increase in raw computing power that has unleashed a blizzard of tech innovations.

From the Internet to electronic prosthetic legs to smart phones, many wonderful things became possible because, for decades, each time the number of transistors increased, the resulting chip was faster. But that all changed about a decade ago.

As the chips became more and more dense, the more electric power they used and the more heat they generated. An Intel executive predicted in 2001 that, unless something changed, by 2010 chips would be as hot as nuclear reactors. Long before they reach those temperatures, chips cease to function properly. To work around that problem, chip designers throttled back the voltages driving the chips.

The net result: Even though chips keep getting denser, the parts that do the calculations—the processors—aren't getting any faster. Chip designers have eeked out modest improvements in processing power, but heat remains a central challenge.

Scientists and engineers at The University of Texas at Austin are exploring some clever ways to beat the heat and help make the next great leap in processor speeds. Two innovative projects aim to create low-power transistors and smarter software.

Transistors get hot because they use electrons, subatomic particles that carry an electric charge, to perform calculations and transfer information. As electrons flow, they bump into atoms and—just like rubbing two hands together—give off heat.

Allan MacDonald, a professor in the Department of Physics, is hunting for a material in which electrons could essentially slide in a group along a slippery path absent friction.

"I try to invent new states of matter," he says, "ones that haven't been studied before." 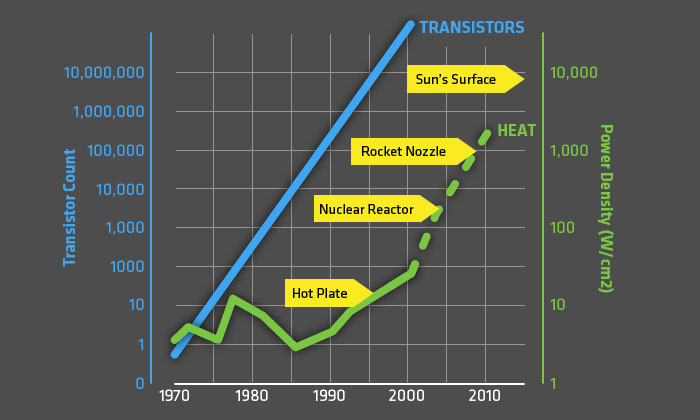 According to theoretical predictions, these states of matter, called exciton condensates, should be possible to cook up, but so far, no one has found the right recipe. MacDonald is a member of the UT Austin-basedSouth West Academy of Nanoelectronics (SWAN), an industry-funded consortium focused on developing new materials for low-power transistors to replace the traditional ones made of silicon. He uses the tools of quantum physics to predict which materials might have the right properties for a better transistor. Other members of the SWAN team try to create these states of matter and see how well their properties match the predictions.

"At the end of the day, you hope to make an impact," says Sanjay Banerjee, professor in the Department of Electrical & Computer Engineering and director of SWAN. "If I could be part of a team that invented the next transistor, that would be extremely gratifying."

Another strategy they're trying exploits the fact that electrons don't just carry an electric charge, they also have a spin. Just as a spinning top can go clockwise or counterclockwise, an electron in a magnetic field can have one of two different spins. So instead of the zeros and ones of computer logic being represented by electron charges, they could be represented by electron spins. Because the electrons wouldn't have to flow through an electric circuit, they wouldn't encounter the same frictional forces as they would in traditional transistors and wouldn't generate as much heat.

This new class of circuits made using electron spins is known as spintronics. Physicists have found materials with these properties, but turning them into functioning devices has proven devilishly hard.

Another way to keep computer chips cooler, while getting more work done, is through smarter software. Keshav Pingali, a professor in the Department of Computer Science and Institute for Computational Engineering and Science, says that for many applications, computers don't have to be perfectly precise. For example, rendering an image on a cell phone.

"You could render that image precisely, but maybe you could produce an image that looks just as good to the human eye with half the energy," says Pingali. "If your eye can't tell the difference, why bother? It's just a waste of power and energy."

Other ideas include streamlining Internet search engines so that they produce three or four pages of highly ranked and useful results, plenty for everyday use, without attempting to generate thousands of increasingly less useful results.

Pingali and his graduate student Xin Sui are evaluating a dozen computer programs that do a range of tasks, from machine learning to rendering images, in order to find the places where "close enough" still gives a good result and significantly cuts energy consumption and heat.

In the late 1970s, IBM was the world leader in manufacturing computer chips. But, thanks to the relentless treadmill of Moore's Law, they were about to run into a brick wall. The technique they used to produce microscopic features on silicon chips involved special chemical films called photoresists. There seemed to be a fundamental lower limit to the size of features like transistors they could create with the technique.

C. Grant Willson, professor of chemistry and chemical engineering at The University of Texas at Austin, and his colleague Jean M.J. Fréchet conceived of a workaround called chemically amplified resists. These materials and their descendants helped IBM maintain its edge in chip production for many years. The process is now used to manufacture nearly all of the microprocessors and memory chips in the world.

Willson received the National Medal of Technology and Innovation in 2007 and the Japan Prize in 2013.

You might well ask, "Why should I care if computers keep getting faster? They're fast enough to type documents, play video games and watch streaming videos."

"Sure, for these conventional applications, today's computers are fast enough," acknowledges Sanjay Banerjee. "But what people don't realize is that, as you go up the performance curve, new applications become possible."

He points to efforts to emulate an entire human brain inside a computer, develop automated image-recognition systems, improve weather forecasts and create new medical diagnostics. He also speaks of the "Internet of Things," a vision for the future in which many of the everyday objects around us have the ability to sense the environment, communicate with each other and work together for the benefit of society.

Banerjee says these applications—and many more we can't even begin to dream of—will rely on even more compact and speedy computers.

Source: Research Tackles the Dark Side of Moore's Law | College of Natural Sciences | IN COMPUTER SCIENCE | Posted on Wednesday, April 15, 2015