Autonomous vehicles are one of the most buzzed-about segments of artificial intelligence right now, with big investments in their research and development. Automakers from Ford to Delphi are pushing forward with promises to release fleets of driverless automobiles. Toyota is building research hubs for self-driving vehicles. Others are considering the impact it could have on industries like trucking.

Stone spoke with Xconomy during what has been a busy week for self-driving cars. The federal government released its first guidelines on the sector, providing 15 points on design and development safety, as well as plans for how to review future regulations, among other details. Meanwhile, the co-founder and president of Lyft, John Zimmer, predicted that most cars will be autonomous in five years and that car ownership will dwindle after that. 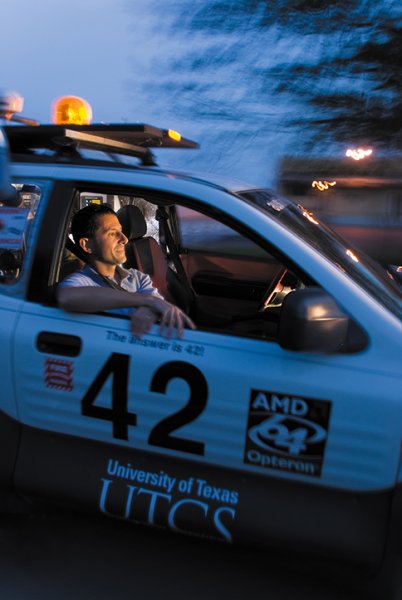 Xconomy: With the first reports of deaths related to semi-autonomous car crashes, what are your thoughts?

Peter Stone: At the highest level of context, it’s inevitable that as we transition to autonomous cars that there will be accidents. It’s also inevitable that the first one that happened will get a lot of attention. If people are able to keep their eye on the big picture, and notice that there’s something like 33,000 traffic fatalities in the U.S. every year—most of those don’t even make the news because they’re so commonplace. That’s with human-driven cars. The burden of proof shouldn’t be perfection. The standard shouldn’t be perfection. The standard should be better than people. It’ll become clear pretty quickly that autonomous cars are going to overall be a good thing.

X: Where are we in reaching that better-than-human goal?

PS: It’s hard for me to quantify sitting from where I am. I’m fairly confident that, if we could wave a magic wand and make all the cars on the road autonomous right now, and replace all the human drivers on the road, we would instantly have much safer roadways. Even right now, using current autonomous car technologies. Some of the technology we use is still more expensive than it can be to have it widely deployed and affordable.

PS: The first demonstrations of autonomous cars were in the late ’80s. By 2007, there was the DARPA Urban Challenge; I had a car there. There were cars there that were fairly reliable, though they hadn’t been tested on millions of miles like the Google car has been now. From that, we can have a lot of confidence that the technology is there. The barriers now are cost, confidence in the technology on the part of the general public, and also the legislation and insurance issues that have to be solved.

X: What are your thoughts about the federal policies announced this week?

PS: I don’t know if you’ve seen the AI100 report. We had a whole section on transportation and on policy. One of the top recommendations is that there needs to be flexibility in regulations. If there are regulations, you need to do it on a sector-by-sector basis. It’s a good thing that technology is being considered not as AI being one thing, but rather this being AI technologies in autonomous cars. From what I saw, they’re leaving open explicitly the need to revisit guidelines every year and with technology experts fully in the loop. That’s a good sign.

X: The camera in my car sometimes doesn’t work when I pull up to something like a gate, to let me know I’m getting too close. Is that consumer confidence issue a big barrier to cross?

PS: There’s the confidence issue and the technical reliability issue. The camera in your car is probably not the state of the art sensor. The algorithm behind it is probably not the state of the art algorithm. It’s probably also not being trusted to drive your car. The technology needs to be the best we can make it, but there’s also tradeoffs with costs. If we put a high-fidelity Lidar there in place of your camera, I can tell you it wouldn’t make any mistakes at all. But it would also be much more expensive. There’s going to be a trust issue. You don’t trust it. But once you start driving in a car that starts making decisions reliably, you will start trusting it. In the same way, I have a 16-year-old son who is driving on the road. At first, I didn’t trust him. Gradually, I’ve watched him drive and he’s taking a driving course. He’s been tested now and certified. Gradually, I and other people on the road start trusting him as a driver that’s going to do mainly predictable things. I think that’ll happen with autonomous cars as well.

X: Do you have any take on when we’ll see more autonomous cars being on the road?

PS: I’m not going to put my finger on a year. The technology is already here. It’s a matter of the legal, the policy, the social, and the cost. I can’t predict how long that will take. Once there are autonomous cars on the market at an affordable price, no one will buy any other type of car again, in the same way that once high-definition televisions were on the market, that took over the market instantly.

X: Do you think it will come sooner than later?

PS: Car companies are pushing toward it, and once there is a car on the market, that’s what people will buy.

X: What are your thoughts if an AI system has to make a moral decision?

PS: We also call this out as an issue in the AI100 report. But I don’t have much to say about it personally. Ultimately, we’ll need to decide as a society what the “correct” decision is in such situations.

X: Do you think overall car sales will drop once autonomous cars sales become more dominant? Lyft’s president says he thinks people will only use ridesharing services when autonomous cars take over the market (which may not be a surprising remark).

PS: Yes, I think it’s quite plausible that autonomous cars will make carsharing sensible to many people. I’m not sure if everyone will accept it. But if the price is right, I suspect many will.