When 100% of Cars Are Autonomous 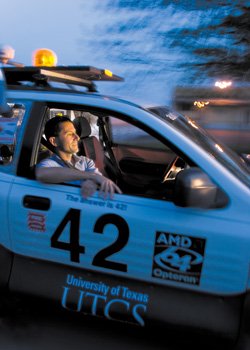 What would cities be like if all cars were completely self-driving?

In a project published on November 8, the New York Times explored the potential effect of autonomous cars on many aspects of the driving experience, from wildlife to traffic tickets and even city aesthetic and the need for street signs and how cities without drivers would look. As part of the project, one writer talked to UTCS professor and autonomous robotics researcher Peter Stone about how self-driving cars could speed up city commutes and make transportation safer.

Stone said that autonomous cars would be safer and would only crash due to mechanical errors. Autonomous cars could also reduce traffic throughout a city since computers at intersections could figure out the most efficient route for each car, thereby requiring that less cars come to a stop and reducing the delay time at these intersections.

“Right now, it takes me an average of 20 minutes to get to work, but with autonomous-car intersections, it might be half that time,” Stone said.

Read the article and see the entire story from the New York Times here.