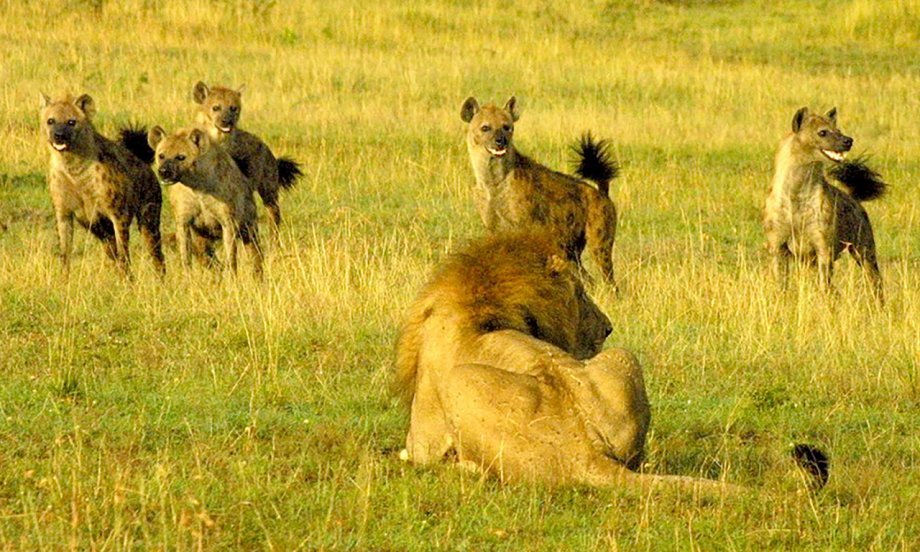 Evolutionary biologists never have enough time. Some of the most mysterious behaviors in the animal kingdom—like parenting—evolved over thousands of years, if not longer. Human lifespans are just too short to sit and observe such complex behaviors evolve. But computer scientists are beginning to offer clues by using artificial intelligence to simulate the life and death of thousands of generations of animals in a matter of hours or days. It's called computational evolution.

One behavior that's long baffled biologists is called mobbing, in which a gang of hyenas team up to steal prey from much more powerful lions. When UT Austin computer scientists Risto Miikkulainen and Padmini Rajagopalan simulated hyenas and lions on a virtual African savannah, they found something surprising.

Watch a video of real-life hyenas mobbing (courtesy of Michigan State U.)

Music for today's show was produced by:

Marc Airhart: This is Point of Discovery. Today, I've got a special treat. I'm handing over the reins of the podcast to our science writing intern, Cason Hunwick. He explores what artificial intelligence might teach us about how hyenas in Africa evolved a surprising hunting tactic. Along the way, you'll learn about an area of computer science called computational evolution, where machines evolve solutions in response to complex problems—and a lot more quickly than we living things can do. Cason spoke with computer scientists Padmini Rajagopalan and Risto Miikkulainen from The University of Texas at Austin.

Cason Hunwick: Imagine you're in a grassy African savannah, the sun's hanging low, just about to set, but then … you hear a lion. You look over and see a lion standing over a zebra carcass. There's blood and torn, striped flesh in its mouth. It's clear that the hunt is over and this –– is dinner. But wait … a spotted hyena has just approached the lion, hoping to do what you just thought was impossible and steal some of the lion's kill. It lunges for the zebra carcass. But the lion makes a precise, powerful strike and sends the hyena screeching and running. Of course, for a solo hyena to try this is pretty foolhardy and in attempting to steal prey from the lion, it could easily become it.

CH: But in groups, spotted hyenas have found a way to steal the kill and walk away without a scratch –– scot-free, full stomachs. They group up and execute a coordinated attack on the lions, in a cooperative behavior known as mobbing. Back on the savannah, let's listen in as a collaborator of two UT computer scientists, Michigan State University professor of integrative biology Kay Holekamp, looks on at the behavior. She is joined by a member of her lab, Erin, who provides the play-by-play in this recording of a successful mobbing event in Kenya. Erin counts the approaching hyenas ...

CH: Two more join and it becomes a frenzy …

Erin: There's a mob, kind of circled the lions … they've all clustered up over there

Cason: And finally, they all rush together …

Erin: They've driven off two of the lions. Oh! They got the carcass! Nice guys.

CH: Mobbing has been the subject of study for decades, because it's something of a mystery. Hyenas behave instinctually -- and yet they find strength in numbers. Enough hyenas together can overpower the stronger predators. But how does this behavior evolve? University of Texas at Austin computer science researchers Padmini Rajagopalan and Risto Miikkulainen studied this question.

Padmini Rajagopalan: We can't study evolution in action, in the real world, the only way we can really do it is in simulation.

CH: That's Rajagopalan. She says evolution is just too slow to observe. Plus, you can't look back in time. Instead, you have to simulate how hyenas' behaviors may have developed over the generations. To accomplish this task, Rajagopalan started out with 100 randomly generated learning algorithms -- they're sort of like stands in for those early hyenas' brains ... And out of this first generation of 100 "blank slate" artificial hyenas, Rajagopalan randomly selects ten of them, assigning the task to mob the lion. Now at least four of them will need to rush the lion simultaneously and if they run in too early, they die. If they come in after the lion is mobbed, they get less food.

PR: This way, I test many different… teams of 10 hyenas. Once I've done that, I look at the population of hyenas and see which were closest to what I wanted them to do.

CH: Many other teams of computerized hyenas from each generation are tested and run through these trials. The hyenas that "survive" get to "reproduce."

PR: So what I mean by that is I mix up their little codes and get new hyenas that hopefully have some of the best characteristics.

CH: The ones with higher fitness levels have more offspring. This mimics how the behavior evolved in real life. Hyenas that behave in ways that are beneficial then survive to mate and pass on their traits, while those that behave in ways that hurt their chances of survival and mating are less likely to pass on their traits. Repeating this selection, testing and reproduction for 1,000 generations happens a lot faster on a computer than in real hyena lifetimes.

PR: In the initial generations, we saw other behaviors emerging. There was this risk-taking behavior where the hyena just went straight to the lion, attacked the lion all by itself and died. And there were these risk-averse hyenas which stayed far away from the lion waiting for it to be driven away. So they avoided death but they also didn't get much reward. Slowly, over the next few generations we saw that mobbing emerged as a kind of combination of these behaviors. Both the risk-averse and the risk-taking.

CH: So, in other words, mobbing arose out of two kinds of impulses the hyenas developed: "I don't want to die" and "I want the reward." But then, Rajagopalan saw something unexpected. Those two extreme behaviors on each end of the spectrum: rushing in and dying, or waiting around the periphery, those did not go away.

PR: Those behaviors I mentioned that emerged early, like the simple behaviors of attacking the lion by themselves or waiting around far away and never really participating in the mobbing event, these behaviors still tended to stick around even though I evolved the hyenas for a very prolonged period. So the mobbing behavior itself did emerge within the first ten generations, but I kept the evolution going for 1,000 generations and still these other behaviors did not go away.

CH: Why did they stick around? Computer scientist Risto Miikkulainen who was Rajagopalan's advisor for the work, asked the same question. And, he offered an explanation.

Risto Miikkulainen: But why would they stay around? You would think that hey now they have a successful mobbing that just takes over the whole population everybody does the same thing. But you don't see that in biology, I mean, in all kinds of societies you see a persistent minority and we saw it here as well. And that was a surprise but after the fact we can explain it. Let's say that now there's a new species or new group of lions that are much, much stronger for some reason. So now it's really good to have hyenas that are less bold and the species survives and they develop a better strategy.

CH: And, similarly, if lions became weaker, being that fearless go-it-alone hyena might start to pay off with big rewards.

CH: Now, Miikkulainen explains that while these simulations are useful, they won't entirely replace field work in the real world.

RM: Computational simulations can always give you suggestions or insights or proposals on what to look at. But the actual verification still has to be done in the discipline itself.

CH: So thankfully, biologists and computational scientists aren't in opposition. Scientists can use technology in some constructive back and forth. Biologists find something interesting in the field –– maybe in cells or primate behavior –– and computer scientists study it in theoretical space, returning to the biologists a suggestion for what to look for in the field, in real life. For example, in mobbing, the UT computer scientists may ask field researchers if they observe those two hyena behaviors that stuck around in the simulations: maybe if they see a hyena lurking far away and joining only after the mobbing has ended, or if they see that brave hyena rushing in alone and risking its life. In this way, both groups need each other. And there are plenty of fields this new kind of artificial intelligence –– computational evolution it's called –– could help. Any field that involves complex problem solving can benefit from systems that evolve solutions to problems. But Miikkulainen again makes it clear that the technology isn't meant to replace humans.

RM: We are talking about machine creativity and machines coming up with surprises and solutions that humans won't think about. But it's still a tool for humans. It's an extension of their thinking.

CH: This is Cason Hunwick reporting for Point of Discovery.

MA: Thank you, Cason. Point of Discovery is a production of The University of Texas at Austin's College of Natural Sciences. Music for today's show is by pogmothoin (a.k.a. Tom Griffin) and by Podington Bear. To read a transcript of this show and see a video of real-life hyenas mobbing a lion, visit us on our website at pointofdiscovery.org. If you like what you heard, be sure and tell your friends. We're available wherever you get your podcasts, including Apple Podcasts, Google Podcasts, Stitcher and Spotify. Our senior producer is Christine Sinatra. I'm your host and producer Marc Airhart. Thanks for listening!

About Point of Discovery

Point of Discovery is a production of the University of Texas at Austin's College of Natural Sciences. You can listen via Apple Podcasts, Spotify, RSS, Stitcher or Google Podcasts. Questions or comments about this episode or our series in general? Email Marc Airhart.