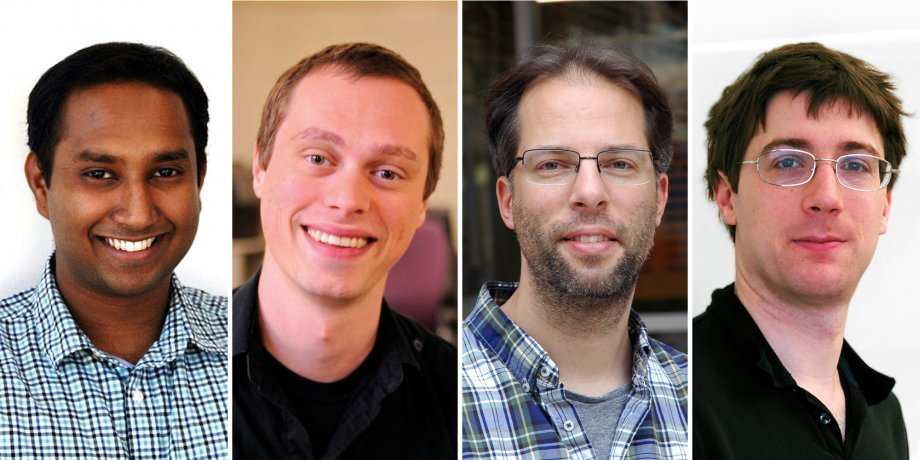 Popularly known as the NSF CAREER award, this is NSF's most prestigious award in support of early-career faculty “who have the potential to serve as academic role models in research and education and to lead advances in the mission of their department or organization.''

Don Fussell, the Trammell Crow Regents' Professor and Chair of the UT Computer Science department, said he was delighted but not surprised by the large number of UTCS faculty who won the CAREER award this year.

"Like other top-10 CS departments, we usually get just one or two CAREER awards a year,'' he said. "This year, four of our junior faculty have won CAREER awards and two have won Sloan awards, which reflects the quality of our recent hires and the strong commitment to computer science by the University administration.''

Fussell said he was particularly happy that the new CAREER awardees span a broad range of research areas from computer systems to robotics and theory, reflecting the strong research programs at UTCS in all areas of computer science.

Professor Vijay Chidambaram, director of the UT Systems and Storage Lab (UTSASLab), is being recognized for work on building robust infrastructure with high performance to meet the demands of big-data applications. His current projects, which are funded by VMware, Facebook, and the National Science Foundation, include improving the performance of Ethereum, and building storage systems with new technologies such as Phase Change Memory. His Ph.D. dissertation won the SIGOPS Dennis M. Ritchie Dissertation Award in 2016, and he has won Best Paper Awards at the FAST conference in 2017 and 2018.

Professor Scott Niekum is the director of the Personal Autonomous Robotics Lab (PeARL), which aims to enable robots to be deployed in homes and workplaces with minimal intervention by robotics experts. His research focuses on the development of machine learning algorithms that can learn efficiently and safely from interactions with humans and experiences in the world. He has collaborated with Silicon Valley robotics companies Willow Garage and Bosch to develop algorithms that enabled a robot to learn to assemble IKEA furniture from human demonstrations. He was the co-leader of Team UT Austin Villa, who won 3rd place in the 2017 Robocup@Home Domestic Standard Platform League, an international robotics competition focused on mobile manipulation and human-robot interaction.

Professor Simon Peter is the director of the UT Austin Systems Research Consortium, which is working closely with industry to shape the future of cloud computing. His current research includes co-designing the networking and storage stacks with new hardware technologies to push server I/O efficiency an order of magnitude beyond today's capabilities, and it is supported by VMware, Microsoft Research, Huawei, and Google. He was awarded the Jay Lepreau Best Paper Award at the OSDI conference in 2014 and 2016, and his work is being recognized this year with a Sloan Award as well.

Professor Eric Price has done ground-breaking studies on how algorithms can produce more accurate results with less data. Two themes of his research are adaptivity, where initial data can guide future data collection, and signal structure, where a structural assumption such as from sparsity or deep learning can yield provable improvements in sample complexity. His research was featured in Technology Review’s TR10 list of 10 breakthrough technologies of 2012, and his Ph.D. dissertation won the George M. Sprowls Award for best Computer Science thesis at MIT.

Professors Chidambaram, Peter, Niekum, and Price join nineteen other past and present members of the UT Computer Science faculty who have won NSF CAREER awards.