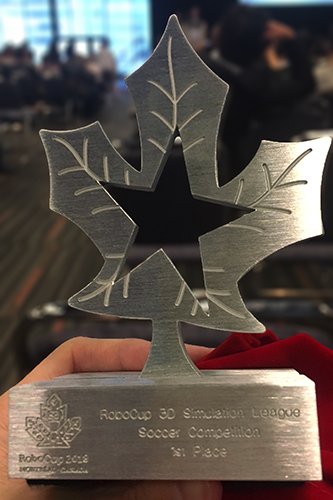 UT Austin Villa continues its winning streak in the 3D Simulation League by defeating magmaOffenburg 2-0 in the championship at last week’s RoboCup 2018 competition.

On Thursday, June 21, UT Austin Villa faced Brazilian team BahiaRT in the 3D Simulation League semifinals and won 6-0, then played against and defeated magmaOffenburg from the Offenburg University of Applied Sciences to win the world championship for the fifth year in a row. During this year’s RoboCup competition, the UT Austin Villa 3D Simulation League team won all 23 games they played, scoring a total of 139 goals without letting any opposing team score once.

In the RoboCup simulation leagues, teams of software agents, or programs that simulate robots, play against each other in a two- or three-dimensional computer environment that mimics the rules and physics of a soccer game in the real world. The goal of the simulation leagues is to program the simulated robots to behave strategically while playing the game and, specifically in the 3D Simulation League, create the humanoid robots’ basic behaviors such as walking, kicking, turning and standing up. 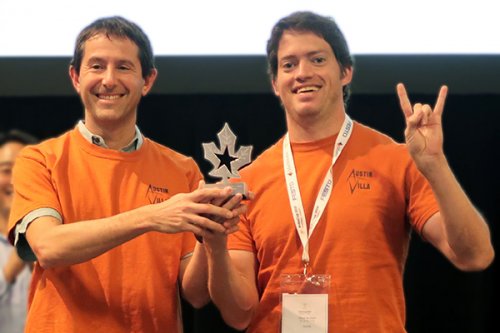 UT Austin Villa has won seven out of the past eight 3D Simulation League championships and placed second in 2013. Over the past eight years, the team has won 147 games, lost three times and tied six times, with a total of 779 goals scored and only seven scored against them by the opposing team.

This year, the league has become more competitive: FCPortugal, magmaOffenburg’s opponent in the semifinals, unveiled a new kickoff set play that is difficult to stop, and magmaOffenburg revealed a new faster walk that prevented UT Austin Villa’s kickoff set play from working. However, UT Austin Villa has also improved to face the increased competition; the team trained a deep neural network to figure out where to pass the ball, added new variable distance fast walk kicks, and optimized the goalie’s diving behaviors.