Can Robots and Humans Co-Exist in Public? UT Campus Study Will Offer Answers 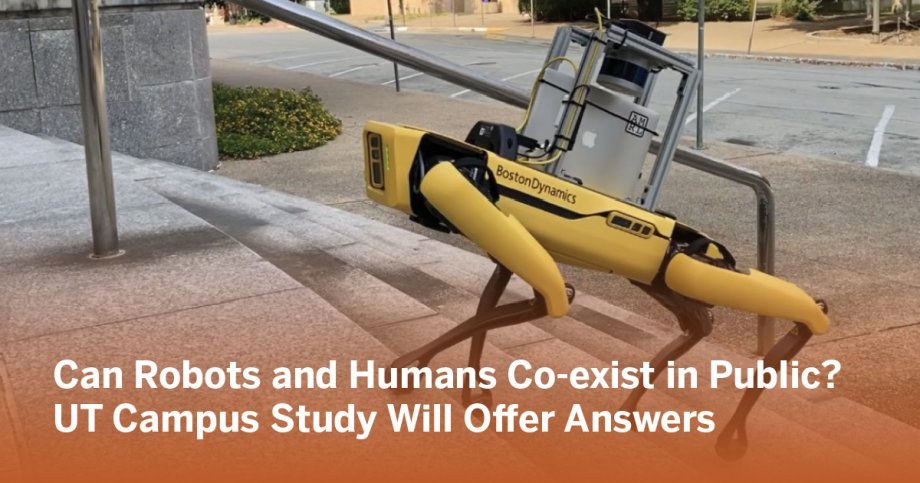 Autonomous robots will soon rove the buildings and streets of The University of Texas at Austin campus. But unlike other commercial delivery services, this fleet of robots will help researchers understand and improve the experience of pedestrians who encounter them.

A new grant to an interdisciplinary team of researchers at UT Austin, including computer scientists Justin Hart and Joydeep Biswas, will support the creation of a robot delivery network on campus, with the first deployments scheduled for early 2023. The researchers plan a five-year study focusing on what it takes to create, safely operate and maintain this kind of robot network, while also adapting with the humans who live and work around it.

The team's research promises to become the most extensive data about human-robot encounters in public spaces to date. Over time, the team will learn how state-of-the-art robotic autonomy and a real-world community can best co-exist.

The researchers plan to use two different types of dog-like robots made by Boston Dynamics and Unitree. In later phases of the research, the robots will go out in teams of two, monitored both by chaperones and people remotely. When the network is up and running, members of the UT Austin community will be able to order free supplies such as wipes and hand sanitizer via a smartphone app. The robots will deliver them to certain pedestrian zones on campus, door-to-door. The robots seen will potentially encounter hundreds of pedestrians. The researchers want to understand the behaviors and interactions that are expected from the robots during these encounters.

Justin Hart, an assistant professor of practice in the Department of Computer Science explains “A warehouse automation robot can be designed to work around people, but the people are trained to know how the robot will behave, and what things will hinder its work. If you consider a robot that needs to interact with people in order to get its job done, the robot must be able both to make itself understood through a variety of communication modalities and to understand people through all of those modalities as well.”

Through completing this research, systems can be developed enabling robots to communicate information to pedestrians effectively as well as understand social cues that they may encounter on a day to day basis.

Studied through the Good Systems research grand challenge, the new $3.6 million grant from the National Science Foundation expands on their six-year project Living and Working with Robots, which kicked off in September 2021.

The researchers expect to gain insights from observing and interviewing people who encounter the robots in a variety of contexts. Importantly, the team knows reactions will vary widely and wants to develop tools for understanding the full range of experiences encountering robots on campus can produce. This work could help designers figure out how future public-facing robots should be designed to co-exist within diverse communities like UT Austin's, as well as how and where they should move.