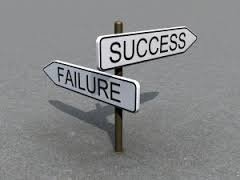 As we rapidly approach finals week (*shudders in horror*), I've constantly been thinking about the amount of work I have to do and how much I have to study and all the extracurriculars I regularly have to commit to. In short, I, and I'm sure a lot of others, am drowning in stress.

But more than that, I'm terrified at even the prospect of failure in the upcoming weeks, mostly because I've had to face the reality of it many times during this semester. So I've also been thinking a lot about how to adequately deal with failure.

Firstly, and most importantly, get back up. If you did not perform to your or someone else's standards, there is absolutely no point in wallowing and feeling like a failure about it after the fact. I'm not saying to completely forget about the mistakes you've made because it's very important to learn from your mistakes; in fact, I rather think that's the best way to learn. However, the only thing you can do now is think about how to do better next time.

Secondly, realize that this one failure does not signal your academic apocalypse. You have to know that even if everyone around you has succeeded where you have not, it does not matter. It doesn't matter because you are not them, and how you learn and process information and eventually succeed is different from anyone else.

In an effort to be metaphorical, here's a little anecdote: I went hiking this weekend and ended up being a lot more introspective than I had planned for. But I was thinking, while following my group up and down the rocky slopes, about paths. When I followed the path the person in front of me was taking, stepping on the same rocks as she did, I almost always ended up slipping. And it occurred to me that this was because her path was not my path. The steps I had to take to get to the end would never be like anyone else's and that's okay because I am not anyone else. You must forge your own path to success, and no matter how many times you fall down on the way, you must get back up and keep stomping through those rocks.